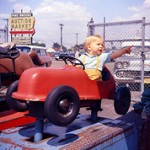 Michael Karl Witzel got the bug for traveling America’s highways early. When he was just a toddler, his favorite pastime was to “hit the road” on the electrically-powered hot rod ride that was parked at the entrance of the local auction market. From there, Witzel never looked back, surrendering those nickel rides for his first pedal car, then a tricycle, and finally a bicycle.

After his dad allowed him to steer the family’s Plymouth Valiant during a family road trip to the Poconos, his eyes were opened and his taste for the road grew. Cars—and the open road—became an obsession. Shedding the confines of youth, he discovered that freedom was powered by eight-cylinders and a four-barrel carb. Behind the wheel of his very first automobile—a 1967 Chevrolet Malibu—he stomped on the gas pedal, laid some rubber on the pavement, and broke free from the chrysalis of youth.

With learner’s permit in his pocket, he grabbed every  available opportunity to explore the roads that beckoned.  Like Sal in Jack Kerouac’s On the Road, he began to forge his own path across that great bulge of land called America. Along the way, he came to realize that the heart of America was still beating strong—out there—along the roads less traveled.  Here, they still “wiped the windows and checked the oil,” left front doors unlocked, and put out pies to cool on the window sill.

Up from this Rockwellian roadscape rose Witzel’s first book, The American Gas Station: History and Folklore of the Gas Station in American Car Culture. Like favorite hits on a jukebox, more titles celebrating the history of vanishing roadside America and car culture followed in rapid succession, including photo-illustrated books about diners, motels, drive-in restaurants, roadside food, Coca-Cola, and the culture of cruising in an automobile. When Witzel realized that the high-speed super slab had long since bypassed the slow lanes of his youth, a nostalgia for the “way things used to be ” drew him back to the Mother Road, Route 66.

The culmination of his return—and subsequent adventures along Highway 66—was the writing and publication of his award-winning non-fiction book, Route 66 Remembered. Upon its completion, he realized that there was much more to Route 66 than just the story of gas, food, lodging, and roadside attractions that his title revealed. Witzel felt compelled to elaborate, not fully satisfied with the scope of this early work. A short while later, he teamed up with wife and co-author Gyvel Young-Witzel to produce a second book about highway 66, a book that would expand on the richness of the topic … and put the history of this road in context.

With her unjaded perspective on the subject, Young-Witzel put a fresh spin on the story of Route 66 by emphasizing the people, places, and circumstances—that over the decades—coalesced to form what some called the “Will Rogers” highway. By way of Young-Witzel’s diligent campaign of organized research, the puzzle pieces would now be presented to the reader in an entirely new form, giving them full access to the keys that revealed how all of the links fit together.

How did the early blazed trails in America contribute to the making of the highway? What role did the bicycle play in the course of early road building? Who were the movers, shakers, and rainmakers that made the Chicago to Los Angeles route a reality? And—how did the towns and states cut asunder by the road work of Route 66 work together to ensure the ultimate success of this once fledgling highway?

The answers (or revelations if you ask Young-Witzel) were literally dug from the archives, photo-agencies, historical societies, and newspapers of the various states that host the route now recognized as a historical monument. Spending countless hours, Young-Witzel poured over forgotten newspaper articles and ferreted out long-lost photographs, taking the occasional “break” to interview a cross-section of interesting personalities and colorful characters that breathed life into the road.

Finally, when the information was gathered together and organized, the work of shaping this unfinished diamond continued: Further collaboration with husband Michael Karl refined the words, sentences, paragraphs, and chapters into a compelling narrative. Careful photo-editing resulted in an exciting blend of original, never-before-seen collection of Route 66 images. Only then—more than two years after the journey began—the Witzel’s gave birth to what Family Motor Coaching called a “Wonderfully illustrated tribute to the best-loved highway in the United States.” A gem of a book, Legendary Route 66: A Journey Through Time Along America’s Mother Road was complete.