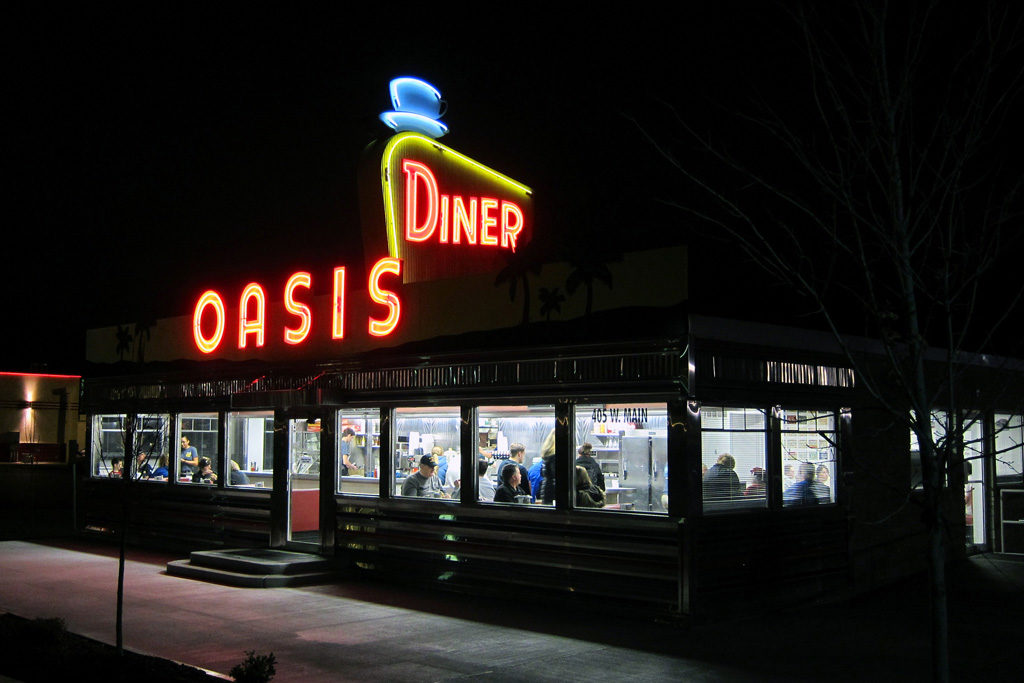 What do McDonald’s, Wendy’s, Burger King, Denny’s, Arby’s, Roy Rogers, Taco Bell, Jack-in-the-Box, and Kentucky Fried Chicken have in common? All have their distant origins in the diner, that unsung institution of roadside America that began over one hundred years ago, decades before there were automobiles, drive-thru ordering windows, milkshake mixers, and remote-controlled speaker boxes.

The Invention of the American Diner

The precursor to the fast-food eatery began in 1872 when Walter Scott, a myopic pressman for the Providence Journal (and one-time street vendor), became serious about selling food and refreshments in the streets. That year, he abandoned the security of his job and swore to dedicate his life to street vending. “I decided that I’d quit other work altogether,” he revealed to a Providence Journal reporter. “I figured I could build a good trade in a little while ... and make a decent living out of it.”

Scott had the moxie to make it work, along with a plan unheard of: instead of wearing out the soles of his shoes and roaming the streets of Providence, Rhode Island, he decided to buy a horse-drawn delivery van. Rolling on four wagon wheels, he would take his food to the people.

His wheeled pantry caught more than its share of onlookers: on each side of the rig, Scott hacked out a rectangular opening! Through what may have been America’s first “walk-up windows,” he fielded orders and served the passersby with a simple fare of egg sandwiches, coffee, and pie.

It proved to be the perfect setup. Scott prepared the comestibles at home, packed them into the van, and trotted around Providence to secure the top sales location for the day or night. When foot traffic thinned and business waned, all he had to do was hitch up his horse and roll off to a more profitable street! For a vendor selling food in the urban environment, this was the best possible configuration for sales.

A Welcome Alternative to Sit Down Fare

The roving lunch wagon format was welcomed by customers, too. At the time, most American cities were ill-equipped to handle workers who desired a quick bite to eat ... at a reasonable price. A few city hotels featured lavish sit-down restaurants, but these were hardly a practical choice for the working man on a budget. Like most of the other fine-eating houses, the prices were exorbitant and the atmosphere was tailored for more affluent clients.

Of course, there were a few bars and nickel dining houses where men of toil could go elbow-to-elbow with crowds of drunken men to wolf down a plate of grub. At many of these dives, the patrons were privy to a free lunch, as long as they purchased a drink or glass of wine. Not surprisingly, it was an uncivilized way to get a meal. One writer of the age described the method of dining as one of “gulp, gobble, and go!”

Besides the lack of atmosphere, the drinking buffets had limited hours and only offered their spreads at noon. After dark, getting a bite to eat was difficult since most bars didn’t offer food and the low-budget hash houses closed for the night. Even the high-class eateries shut their doors after the dinner hour. For these reasons, late-night workers were destined to go hungry unless they brought along their food from home.

It’s no surprise that Scott’s late-night lunch wagon became a friendly beacon in the dark. Before long, his wagon was a regular haunt for hungry insomniacs, red-eyed carousers, municipal workers, cab drivers, delivery men, trolley car conductors, policemen, and even the well-to-do. After Scotty took up residence in front of the Providence Daily Journal offices, former co-workers and friends became devoted fans. Here was the paradigm for street-side dining ... based on service, speed, and quality.

The Lunch Wagon Asserts its Domain

With all that it had going for it, it didn’t take long for other entrepreneurs to take notice of Scott’s operation. A Providence policeman by the name of Ruel Jones was the first to copy the setup, with one major difference: he hired a local wagon maker to build a custom unit equipped with a serving shelf! Lunch wagons were improving.

Ruel’s cousin, Samuel Messer Jones, was the next to gain prominence in the trade. He started out small and saved up the $800 he needed to design and build a lunch wagon that allowed the customers to stand inside to eat! His “distinctive night lunch wagon” was built with fine woods and adorned with ornate etched glass windows. With Sam Jones’ entry into the business, the level of lunch wagon beauty raised up a notch.

Around the same time, a hopeful street salesman by the name of Charles Palmer got the idea to work the shift after Jones closed his own operation down. Palmer thought that the night was a great time to sell food and reasoned that there “were a lot of people going to the theater, to square dances and sewing bees, drinking in the saloons, and so on ... who had to go home sometime.” While on their way to their humble abodes, he planned to feed them and rake in the after-hour profits.

Indeed, the late-night clientele was plentiful and by 1891, Palmer made history when he took out America’s first patent for a lunch wagon! Although lunch wagons were a regular sight on the city streets, not one operator had the vision to register their design! He went on to do quite well in the streetside dining trade and contributed many innovations to the art of wagon design, gaining notoriety by building “lunch wagons of every description, made to order.”

However, Palmer didn’t etch his name into the history books as the sandwich man who dominated the early American diner trade. Nor did Scott, or even Jones. The title of “Original Lunch Wagon King” was reserved for Thomas H. Buckley, a former janitor, and cook who worked his way up from relative obscurity to gain widespread prominence in the lunch wagon business. His claim to fame and way to fortune was the famous eateries known as “The White House Cafes,” a line of gleaming wheeled wagons that lent a respectable image to the trade and pulled the industry further away from its somewhat working-class, beanery image. The homemade wagon was definitely seeing the last of its days.

In all respects, Buckley’s Cafes set the new standard for beauty: the windows were frosted, made of blue and red flash glass, or etched with the portraits of past presidents Washington, Lincoln, or Grant! The exterior walls were painted a bright, titanium white and then decorated with ornate paintings depicting famous events in history. Inside, finely finished woodwork and brass fittings raised the bar of comfort. Buckley took the basic concept, added a touch of luxury, and kicked the trade into a new realm.

By 1910, Buckley’s beauties helped to establish the lunch wagon as a permanent part of the city scene. And what a scene it was: with its densely populated towns, the New England region became a hotbed of lunch wagon construction. As fast as they could, manufacturers like Wilfred Barriere, Albert H. Clossen, P.J. Tierney, and the Worcester Lunch Car Company began turning out compact, mobile restaurants.

Meanwhile, electrical power gained a foothold. A number of towns began taking their horse-drawn trolleys out of service to replace them with electrically powered units. As trolley companies scrapped old cars, they caught the eye of men who were out to make a fast buck in the diner biz. The idea was simple: buy a few of the junked cars at bottom dollar, outfit them with a small stove and other equipment, and sell them as cheap lunch wagons. For those who couldn’t afford a costly Palmer or a Buckley, it was a quick way in. Soon, a raft of these trolley lunches joined other diners in the street and things got crowded.

Birth of the Stationary Diner

With all of the horse-drawn delivery wagons, hansom cabs, and lunch wagons rolling about, established cities implemented laws to ban the food carts. Others imposed restricted hours of operation. As the rules tightened, any operator who wanted to remain in business had to find a permanent location and set down roots. As the dust settled, electrical lines, sewer pipes, and solid foundations replaced the wagon wheels. The stationary diner was born!

Once the diner found its equilibrium, the industry took off faster than a burger patty sliding across a griddle. Three major diner makers emerged and formed the basis of the American diner industry: At the top, the Worcester Lunch Car Company earned a fine reputation with lunch cars of wood and porcelain panels. Diner maker P.J. Tierney pioneered comforts such as the indoor toilet. Irishman Jerry O’Mahony added a new sense of class to diner architecture.

During the 1930s, prefabricated diners reached the height of roadside design when manufacturers built beautiful, streamlined structures. J.B. Judkins produced a curvy model called the Sterling Streamliner and even the Worcester Lunch Car Company came out with a fast, angle-ended building. Suddenly, roadside restaurants looked faster than the car customers they served!

Over the next twenty years, diners kept pace with the tremendous growth of the automobile industry and by the 1950s, the diner was no longer the tiny vending wagon it once was. Now, it was a big, full-service restaurant! Draped in stainless steel panels and decorated with multicolored bands of neon tubing, motorists recognized it as a solid symbol of American enterprise.

This title is currently being reprinted in a paperback edition, but original hardcover copies can be found here on Amazon.com.