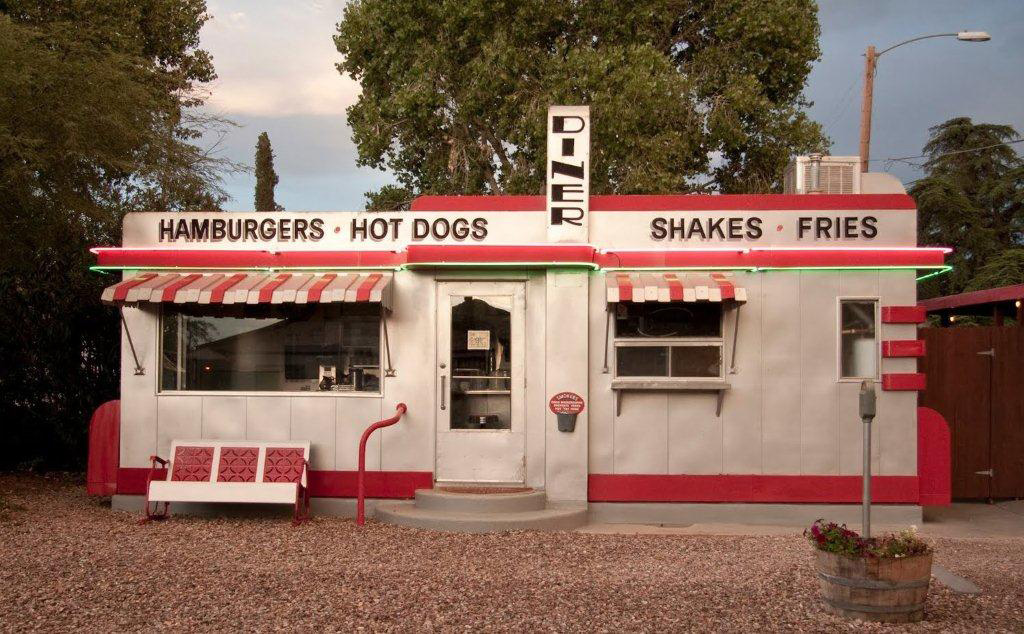 In 1872, Walter Scott inaugurated the East Coast region as the bastion of diners when he served a snack from a rolling “lunch wagon” in Providence, Rhode Island. In the decades that followed, a raft of diner manufacturers appeared, adopting his tenets of portability and efficiency as the basis for construction.

Unfortunately, shipping these prefabricated restaurants wasn’t cheap. The cost of commercial trucking added a substantial amount of green to the total investment required to open a roadside greasy spoon. As a consequence, few of the great diner outfits that established a name for themselves in the New England states found an audience out West.

In 1938, that sad reality was changed for the better when Arthur Valentine turned his vision of building affordable and transportable diners into reality. He founded a company called Valentine Manufacturing, Inc. and over the next thirty-six years, kept himself busy by designing and producing a practical line of “portable steel sandwich shops.”

Valentine based his manufacturing operations in Wichita, Kansas, far from the accepted epicenter of the diner world (a satellite sales office was maintained in West Hempstead, New York). This central geographic positioning proved to be a major advantage over competitors when it came to delivery. Having earned its reputation as the “Heart of America,” Wichita offered equidistant access to surrounding states. With that in mind, the freight added to a diner’s final price could be kept to an affordable minimum.

Now, prefabricated diners could be delivered to all fifty states. And that’s exactly what happened: before the Valentine outfit ceased operations in 1974, the little factory that was located at 1020 South McComas Street cranked out a respectable 2,200 units. Many extant examples of the genre still remain—scattered along the two-lane back roads of America, on the outskirts of towns, Route 66, and wherever one would least expect them.

That’s not surprising since all of the Valentine units were built to last. A channel base of six-inch steel coupled with cross members made of four-inch steel provided the framework for heavy-gauge steel panels that were coated with rust-resistant zinc. Tempered Masonite covered with steel sheet—finished in a high-grade synthetic enamel—comprised the interior walls. Even the floors were constructed of durable materials, fashioned from grease-proof asphalt tile or linoleum.

On the exterior, flying-buttress corners typified the entire line and made the diminutive Valentine buildings unique. An integral advertising pylon positioned front and center distinguished them from the competition. Adjacent to the customer entry, the angular sign sprouted at ground level and angled skyward until it swooped back to join with the roof. Bright colors were paired with contrasting horizontal stripes to further characterize the porcelain enamel exterior.

Valentine’s most popular model was the ten-stool “Little Chef,” a versatile unit with an inside counter and a walk-up takeout window that featured three different floor plans (within a compact footprint of ten by twenty-five feet). More ambitious entrepreneurs could choose the larger “Double Deluxe,” an expanded module outfitted with seven sit-down booths. Along with the standard stools provided, this model afforded comfortable seating for some thirty-six patrons.

In both configurations, the diners left the factory with all of the fixtures that were required to get up and running in the shortest time possible. The kitchen arrangement was engineered for efficient “assembly line operation” and was outfitted with stainless-steel shelves, sink, and countertops. An externally vented fry station, a combination refrigerator/freezer, and an extremely petite toilet facility completed the well-planned package.

All an owner had to do was secure a site, fashion a quick foundation, and wait for delivery! As soon as the plumbing was connected, service could begin. If the location proved to be an unprofitable one, the entire diner could be loaded onto a small trailer and relocated to a busier spot somewhere down the road. Naturally, this concept became a major selling point for the Valentine Company.

Even so, elaborate marketing gimmicks weren’t needed to move product. Valentines were affordable. In the year 1961, the Little Chef model sold for just a little over nine-thousand dollars. To cover delivery and set-up, buyers were asked to pay eighty cents for each mile the box was transported. The company made it easy to get into the business, too: rather than outright purchase, principals were offered “package financing,” a deal that only required a down-payment of one-third and offered a gradual payout over the next three years at a six-percent interest rate.

These serialized, or sequentially numbered diners came with a little metal lock box that was installed outside of the front door. Proprietors were instructed to place the first fifty cents of every day’s take into a small envelope and to drop it down into the slot. Without fail, a traveling representative from the Valentine Company came by at the end of every month to collect this “rent!” Upon finding this pay box empty, many a diner was hastily closed down and pulled from its moorings—the whole kit and caboodle carted back to the factory in Kansas.

A very unfortunate minority discovered that this unwelcome procedure was the only real drawback to purchasing one of these portable and transportable diners on credit. In every other respect, the tiny hamburger, hot dog, sandwich, and ice cream stands that were so handily crafted by the Valentine Manufacturing company of Wichita were a sweetheart of a deal.