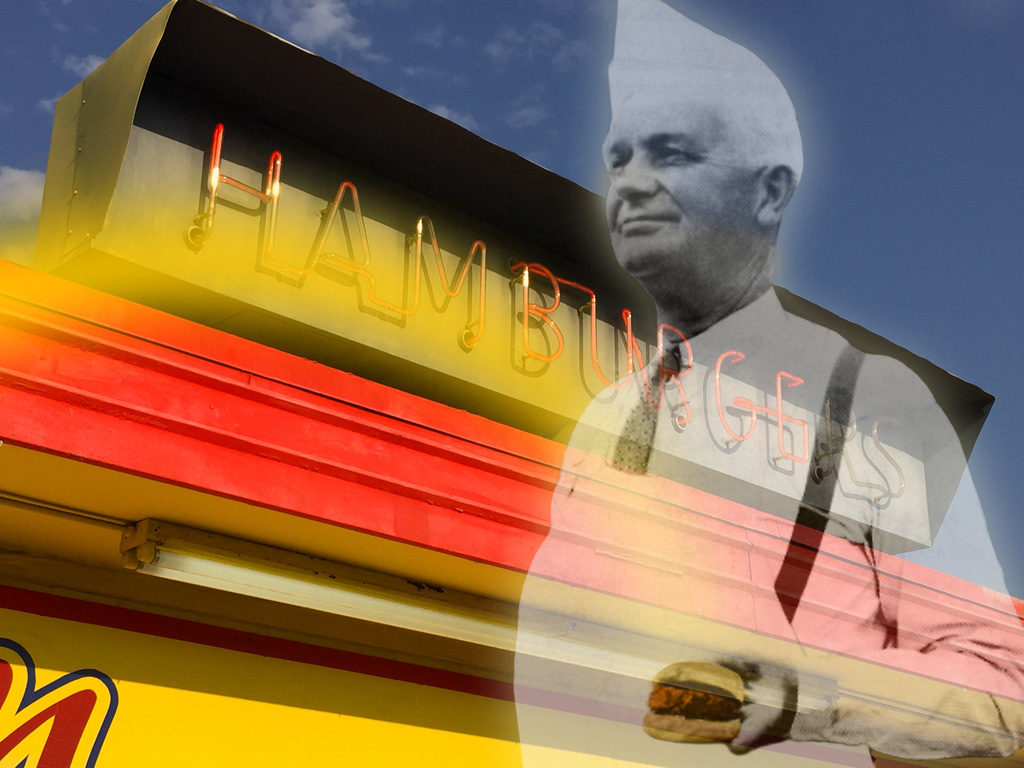 Sure, history books tell of the Tartar’s fondness for raw meat and how sailors from Germany loved to order Hamburg Style Steak upon their arrival in the New World. The real question is: Who created America’s first all-beef patty, the ancestral prototype of today’s Quarter Pounder, Big Mac, and Whopper?

Popular food folklore—peppered with a light sprinkling of facts—often gives the top billing to “Hamburger” Charlie Nagreen, an inventive resident of Seymour, Wisconsin. Seems it all started somewhere around 1885 when fifteen-year-old Charlie began peddling his chopped beef to the throng of hungry visitors attending the Outagamie County Fair.

Worried about soiling their hands with grease, a few genteel patrons asked if Nagreen could supply a more sanitary way of toting the snack meat. Responding with a sizzling stroke of genius, he slapped one of his cooked patties between two slices of bread—and presto! The first truly portable combination of ground beef and bread became a reality.

Five states to the South, the ‘burger-loving denizens of Athens, Texas, have posted a plaque promoting their own history. For them, the original father of the blessed burger has been and always will be legendary lunch counter owner, operator, cook, and chief bottle washer Uncle “Fletch” Davis. By the latter part of the 1890s, old Dave gained a notable reputation locally for his fried patties made of ground steer. He decorated his first hand-held version with a healthy dose of hot mustard, crowned it with a slice of Bermuda onion, and nestled the stack up between dual slabs of homemade bread. Voila, pardner—the hamburger was born!

The state of Ohio throws its own entry onto the griddle with the exploits of Akronite Frank Menches. Seems that in 1892, he tapped into the mother lode of grease at the Summit County Fair with his own creation. When a pork delivery failed to materialize one busy morning, the Menches brothers were left lacking the main ingredient for their famous sausage sandwiches. Snorting their noses at the adversity, they substituted ground beef. With zeal, circular hunks were flavored, formed, and fired. In the spirit of saving the day at the last minute (all too prevalent in food folklore), Frank Menches began slapping patties between the two halves of buns and proceeded to canonize himself as the “inventor” of the hamburger.

Even more colorful is the “just in the nick of time” story handed down to descendants of Louis Lassen, once famed Burgermeister of Louis’ Lunch in New Haven, Connecticut. According to Ken Lassen, current owner and grandson of the founder, an unidentified man came waltzing in at the turn of the century and requested a “quick sandwich.” Ever ready to please, his grandfather mashed a handful of sliced meat trimmings into a single patty, cooked it in a vertical broiler, and slipped it in between—you guessed it—two slices of bread!

Is there really one birthplace of the hamburger? No one will ever know for certain. In all probability, the hamburger sandwich invented itself—created simultaneously by a melting pot of individuals who happened to tune into the universal consciousness of human inventiveness, imagination, and hunger.