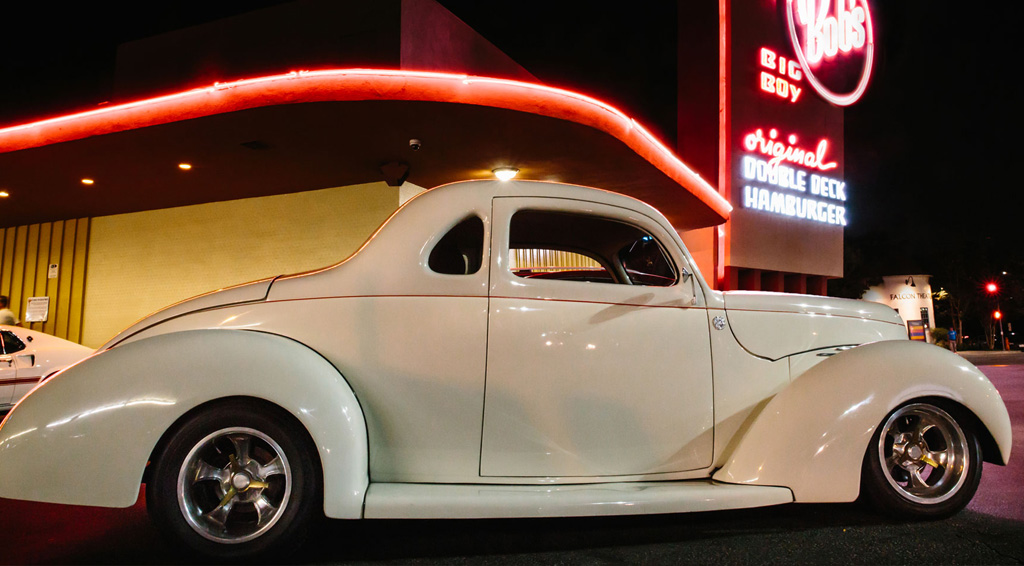 Robert Wian learned the restaurant business the hard way. When his father’s furniture business faltered during the early thirties, he took a job washing dishes at the White Log Tavern to help out. Although fresh from high-school, it didn’t take long for him to become the manager. His experience was soon rolled over into a better job at the Rite Spot, a Glendale eatery favored by Angelinos. There, he learned all the rules of the eating-out game—realizing he had a growing desire to become his own boss.

When two elderly ladies considered selling out their ten-stool lunch counter on Colorado Boulevard, Wian saw his opportunity. Still, he had to make a painful decision: sell his prized 1933 De Soto roadster to get the bulk of the $350 asking price or pass over the deal. It was a clear choice.  The car found a new owner and Wian got the money he needed. The eatery was his! He renamed it Bob’s Pantry and began to work the counter alone.

Members of Chuck Foster’s Orchestra adopted the Pantry as a late-night hangout and stopped in frequently after gigs. High-school pals of Wian’s felt comfortable there, filling up with numerous hamburgers, gallons of Hires root beer, and packets of cigarettes. One frosty night in February of 1937, bass musician Stewie Strange became bored with the usual midnight snack and uttered the historical question, now ensconced in legend: “How about something different for a change, Bob?”

In a teasing mood, Wian was quick to accommodate. He proceeded to cut a sesame seed bun into three slices and flipped two burgers onto the griddle. While the meat sizzled, the band watched in fascination as leaves of lettuce and slices of cheese were readied on the sideboard. Finally, the cooked patties were lifted from the hot plate. Wian plopped on some relish and began stacking up a ridiculous caricature of the hamburger—a double-decked delight pushing burger creativity to the outer limits. The band loved it!

A few days later, chunky Richard Woodruff wandered in through the front door. He lived down the street and often came in to sweep the floor and perform other busy work for Wian. Only six years old, he was already exhibiting a “Wimpy sized appetite for hamburgs [sic]—with a stomach to match.” He figured out his own way to get ‘em and charmed both the lunchtime customers and Wian with his plump physique and droopy overalls. It came as no surprise to the regulars why Bob Wian christened his unique sandwich the “Big Boy!”

After a local cartoonist sketched a rendition of the urchin on a napkin, the tousled hair and chubby cheeks became a trademark adorning the front façade. News of the great-tasting “double-deck” cheeseburger spread and within three years, Wian opened a second eatery in Los Angeles. By 1949, he was franchising his sandwich (and its youthful mascot) to operators in a half-dozen states. Meanwhile, a trio of his own Big Boy dinettes prospered. Featuring “snappy service drive-in lanes and inside seating,” their transitional design bridged the carhop era with the coming age of coffee-shops. In 1964, Wian built his last open-air unit.

A few years later, McDonald’s franchisee Jim Delligatti wanted to bring out a “new idea for a sandwich” when he remembered Wian’s tasty double. During the fifties, he managed a West Coast drive-in and was impressed by the numerous imitators of the twin burger. But whether or not he was influenced by nostalgia or his own imagination remains unclear ... what’s certain is that he developed a close copy of the bi-level Big Boy. Later, he admitted that the conception of this burger clone “wasn’t like discovering the light bulb—the bulb was already there ... all I did was screw it in the socket.” Of course, no credit was given to Wian for his original creation.

Delligatti’s Big “Mac” was introduced nationwide at McDonald’s outlets in 1968. The stacked sandwich was an immediate hit, soon accounting for nineteen percent of sales! But, that was no surprise for Robert C. Wian, Jr.  His double-decked sandwich—created at the spur of the moment to satisfy the desire for something different—had already built a food empire. Another variation on the theme couldn’t hurt. He, and everyone else acquainted with hamburger history ... would always know the Big Boy was Bob’s.