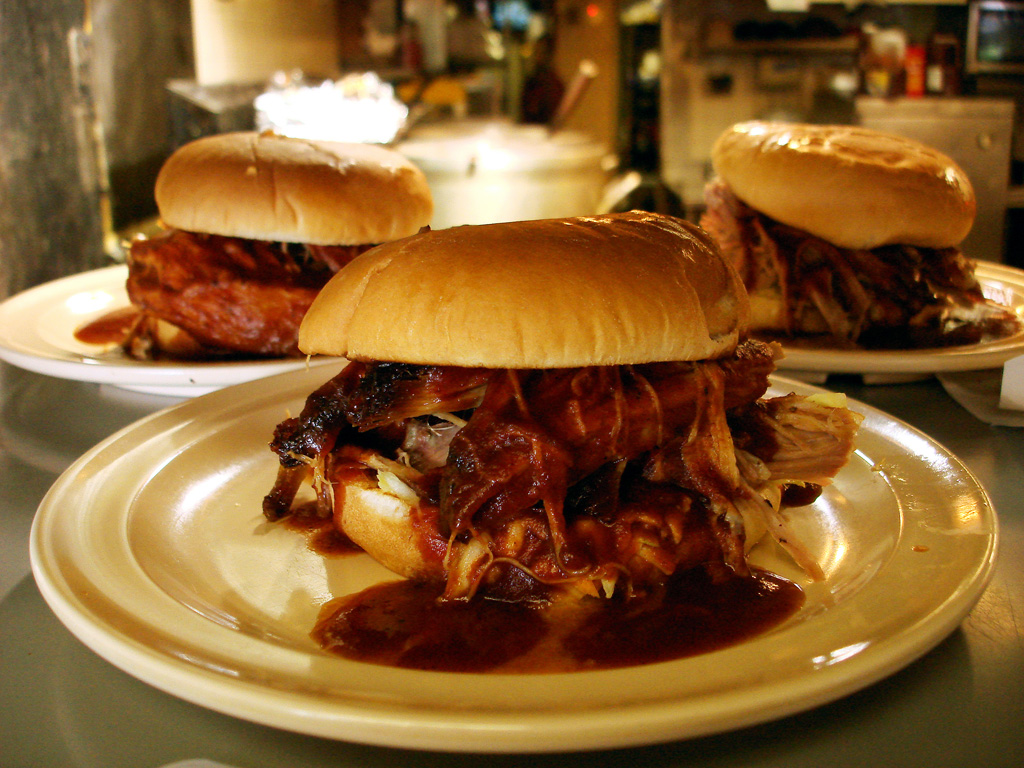 With the advent of television networks devoted to foods and programs geared toward “cooking it yourself,” today’s backyard chefs consider themselves masters of the so-called “barbecue arts.” Unfortunately, clothed in their “Kiss the Cook” aprons—with tongs in hand and battery-powered temperature probe at the ready—they are ill-prepared when it comes to duplicating real barbecue cooking.

You see, contrary to popular belief, barbecue isn’t simply a matter of dousing a bag full of charcoal briquettes with lighter fluid, lighting a match, and then searing a slab of meat on a metal grill suspended above the glowing embers. Really, barbecuing isn’t cooking in a sense that we know it at all, but rather a slow-smoking process that takes place over burned hardwoods like hickory or oak. It’s the succulent smoke that prepares the meat for consumption and gives it character. And no—barbecue isn’t cooking over a propane grill, either.

By all historical accounts, it appears that the confusion began in a land long ago and far away with a Haitian framework of sticks that was used for drying or roasting meat. Supposedly, the explorer Cortez and his happy-go-lucky band of pillagers were cruising the Caribbean when they encountered native Indians preparing fish on these racks of interwoven branches. As seafarers are apt to be, the band was very hungry and lavished praise and approval upon this curious method of meat preparation as their stomachs filled.

Consequently, they took the technique and the word to describe it with them. While their exploration skills were nonpareil, linguists they were not. As often happens, the pronunciation of their newly learned word changed gradually. In the Spanish tongue, the racks and the method of cooking came to be known by the word “barbacoa.” After some further dilution over the passage of time, the word “barbecue” surfaced in English.

Unfortunately, the term did not distinguish the nuances involved in the cooking process and was soon adopted by anyone and everyone who cooked meat on a grill raised over a flaming heat source. By the time the backyard barbecue emerged as an American icon during the 1950s, people assumed that quickly cooking meat on a grill was barbecue. Soon, everything was fair barbecue game, including hamburgers, hotdogs, steaks—even sliced pineapple. By golly, if you could slap it on the grill and cook it without having it fall through the thin wire mesh and burn to a crisp, it was barbecue.

Despite the fact that the elements used to prepare old-fashioned, southern-smoked barbecue (of the type described in this book) and grilled foods have much in common, there are two subtle differences that should be noted in the two forms of cooking. First, with grilling, the fire—whether it uses wood coals or a gas flame for fuel—is very hot. Second, the foods that are placed upon the dancing flames are seared and cooked quickly. The desire to impart the meat with smoke flavor is secondary. Grilling is a lot like driving on the freeway: you can get there pretty fast, but you don’t experience much of the journey while en route.

On the other hand, the type of smoking that is done in a covered cooking arrangement or barbecue “pit” relies on a more patient technique. Here, there are never any active flames directly under the meat. The cooking temperature is much lower and moisture is abundant, with the aroma of smoke a much-desired part of the process. The meat is basted sparingly and cooked throughout. Time is of the essence, but not the way you would normally think: it takes 8 to 12 hours to cook the typical pork shoulder. There is no rush.

The resulting fall-off-the-bone-tender meat is what author John Egerton describes in Southern Food as a “moist, tender, delicious, and distinctively original delicacy.” This is the back-road, slow-lane school of cooking, with all the delightful nuances of the cooking journey recorded in the meat itself.

Today, this time-honored path of slow-cooking is the route taken by barbecue fans in all 50 states. The gospel of ’cue has spread nationwide, with hand-me-down recipes and techniques exported from the South to all parts of the country—and new ones invented. The variety is lip-smacking, to say the least.

In St. Louis, you may sample the best of barbecue pork steaks or pork spareribs. In Hawaii, you will find the traditional Asian-inspired plate lunch or “Hawaiian barbecue,” with Emu-cooked (pit-cooked) pork butt (kalua pig) as the main ingredient. Up in Alaska, barbecued salmon—smoked the traditional way on cedar sticks—is a hands-down favorite. Down in Alabama, you might very well be surprised when your barbecue meat is served with “white sauce,” a local favorite. In Arkansas, the prevalence of chicken dominates the menu, prepared with a dry rub and smoked (diners add their own sauce).

And it continues: Georgia can be categorized as a melting pot of regional variations where almost any type of barbecue sauce or cooking style can be found. Meanwhile, the state of Kentucky presents its own version of barbecued mutton doused with western Kentucky barbecue sauce or what the locals call “black dip,” made with bourbon. Santa Maria, California, calls their town “The Barbecue Capital of the World” and serves up a copyrighted recipe of beef tri-tip roast—a boneless cut from the bottom sirloin that’s cooked over coastal red oak. The fact is that coast-to-coast, nationwide, wherever you find meat, you will find an expert pitmaster or backyard wannabe stoking the coals in preparation.

But like the distinctive barbecue smoke ring—that bright pink colored, 1/8‑inch ribbon of meat that appears below the surface of the meat after cooking—there is a notable concentration of barbecue styles in one particular area of the United States. That area happens to be divided into what some refer to as the “four regions of barbecue,” lauded by barbecue élite and laymen alike as the true bastions of authentic American ’cue.

For hardcore fans of smoked meat, no place can compare to Texas, Kansas City (Missouri), Memphis (Tennessee), or North Carolina. These are the four regions that set the standard for the nation. Here, the delineation between the types of meats, the time spent cooking it, the equipment and fuel used for cooking, the role of smoke in the preparation, the blend of seasonings, the style of serving, the type of side orders served, and the varieties of barbecue sauces and other flavorings used are the most distinct.

Throughout this geographical smoke ring of barbecue regions, one common denominator cuts across all social and economic lines, summed up most eloquently by Jeff Jones of the Skylight Inn of Ayden, North Carolina. As he puts it, “The particular barbecue that you take a liking to is according to whatever you grew up with! If you had barbecue with a lot of sauce, then you are going to want a lot of sauce on your barbecue. But if you grew up around these parts and are used to adding only a simple sauce made with vinegar and spices, that will be your favorite.”

On the other hand, it can also be argued that “there ain’t no such thing as bad barbecue—only good barbecue and better barbecue!” All preferences aside, the true, fanatical devotee of barbecue is hard-pressed to refuse any platter served to him or her, regardless of how or where it was prepared.

And that, my barbecue-loving friends, ties into your mission: get a true picture for yourself of what kind of barbecue is simply adequate and what kind of barbecue may be categorized as legendary. Head out on the highway and visit the pits of Texas, Kansas City, Memphis, and North Carolina for yourself! Meet the real people who make the food, go behind the scenes, talk to the locals, and revel in the atmosphere.

Take your time—this isn’t fast food that can be snatched up at a drive-thru window, but rather true American “slow food” that should be savored and enjoyed without haste. As you bite into a rack of succulent ribs, sink your teeth into perfectly smoked burnt ends, or wolf down a Lexington-style chopped-pork sandwich with brown, you’ll discover your own favorites, your own legends.

Go there with a good appetite and take no heed to the reviews you may read online or in other publications. This author has discovered first-hand that when someone dismisses one of the classic pits as “not that good anymore,” it’s most often done out of some ulterior motive. I’m reminded of something Anita Patrick, long-time waitress at Corky’s Bar-B‑Q in Memphis, told me when I mentioned to her that I read her eatery was overrated. “Jealousy is an ugly thing!” she exclaimed with great emotion, and I soon knew for myself that it was true. After sampling one of Corky’s signature pulled-pork sandwiches piled high with coleslaw, I knew that I had found barbecue heaven.

For this reason and many more, I will make no attempts to rate one barbecue establishment over another or to convince you why one type or style of barbecue is superior. To do so would be presumptuous and require a certain amount of hubris on my part. I’ll leave that unenviable task to the unending roster of food and restaurant reviewers. Within the pages of this book, my goal is to introduce you to America’s four most prominent regions of barbecue and leave you to make up your own mind as to what is good, better, and ultimately best.

So, if you claim to be a barbecue lover, it’s your responsibility to seek out the grease houses of Kansas City and the classic barbecue pits of Memphis. It’s your duty to amble on down to Texas for a bold taste of pit-smoked beef and to mosey on over to North Carolina to experience the art of pig pickin’ at its finest. Whether you call it barbecue, bar-be-que, bar-b‑q, bar-b-que, bar-b-que, B‑B-Q, BBQ, barbeque, or just plain ’cue, there’s a style out there that will make your taste buds sing for joy and your spirit shout “Hallelujah!” For this ecstasy is what makes up the myth—and the magic—of Legendary Barbecue.