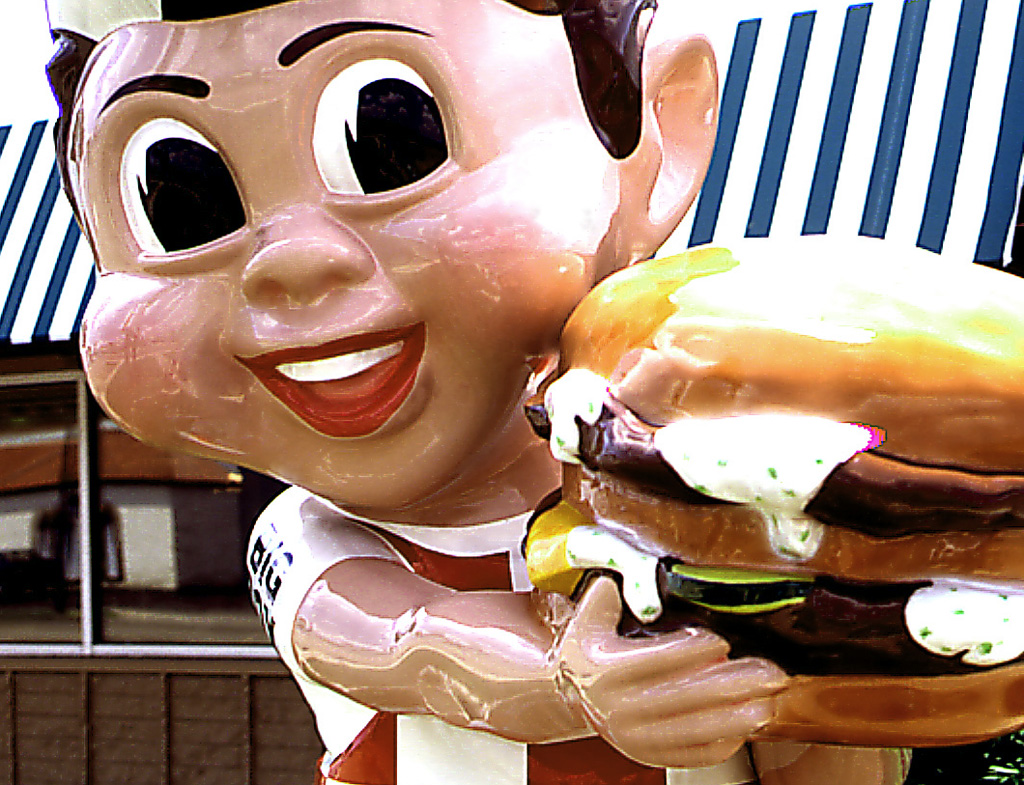 In 1937, Robert Wian created his signature two-story cheeseburger at a five-stool lunch counter in Glendale, California and along with it—gave birth to a new roadside icon. At the time, six-year-old Richard Woodruff was a regular customer there, always on the make for free food. Occasionally, Wian let him sweep the floor in exchange for a burger snack. Charmed by the lad’s droopy overalls, pudgy physique, and limitless appetite for grilled patties of ground beef, he decided that his new multi-level sandwich should be called the “Big Boy.”

Later, a local cartoonist sketched a rendition of the hungry urchin on a napkin and before the decade was done, the toddler with tousled hair, red and white checkerboard overalls and big belly was a trademark for hamburgers, adorning advertising signs, wrappers, and even the front façade of Bob’s Pantry.

Spurred on by the memorable images, news of Bob Wian’s delectable “double-deck cheeseburger” spread and by the 1950s, he was franchising the tasty Big Boy sandwich and its endearing trademark to restaurateurs in six states (McDonald’s modeled their own Big Mac after the Big Boy burger). Within a time span of twenty years, the portly kid was greeting hungry customers nationwide!

By that time, he was a larger-than-life statue sculpted of painted fiberglass—holding a deluxe platter of burgers and Fries high in the sky for all passing by to see. More adorable than the Burger King, Wendy, or even Ronald McDonald, his burger-lovin’ smile and friendly demeanor entreated motorists to drive in and chow down. Despite an obvious weight problem, he liked food and wasn’t ashamed to display his culinary passions in public.

In spite of this quiet success, the Big Boy’s best years as an outdoor burger salesman were somewhat short-lived. After Wian passed away, stewardship of the chunky chap was assumed by what else: a corporation. As hard as it was for loyal customers to believe, the bean-counters in charge were contemplating his dismissal! After an unfavorable response from the public brought them to their senses, the ousting of the oversized mascot was put to a vote. Should the Big Boy stay or should he go? The answer came back a resounding yes: Americans liked the little butterball and wanted him to remain as company mascot and doorman.

Nevertheless, some in the radical fringe weren’t happy with the decision. The controversy came to a head in 1994 when bandits pilfered a 300 pound, six-foot-high Big Boy statue from a Toledo, Ohio restaurant. Showing little respect for the edifice, they dismembered it with a hacksaw and dumped the pieces at Big Boy outlets in the surrounding area. Notes that were attached to the ragged fragments declared “Big Boy is Dead.”

After a short investigation, detectives apprehended eight college boys and two underage youths and charged the entire gang with criminal mischief. As part of their punishment, the mutilators were forced to repay the $3,000 required to replace the fast food icon. Why did they steal the defenseless Big Boy and degrade it with such wild abandon? “We were bored,” retorted eighteen-year-old Bobnapper Tom Martinez.

And the saga continued: A short while later, California artist Manfred Bernhard was relieved of his duties as the talent behind the popular Adventures of Big Boy comic book (he’s been drawing the chubby character for thirty-eight years). Craig Yoe of Yoe! Studios has been contracted by the restaurant chain to design a newer, more streamlined version of the burger boy and make him look like someone who has his fast food cravings under control. Shoveling down piles of burgers will be a definite no-no.

According to Tony Michaels, Vice President of Big Boy marketing, it’s the “kids that have been asking for a more athletic looking Big Boy!” So, to placate the demand for a more spindly representative, the Big Boy will receive a long-overdue cholesterol check and a tummy tuck. Although high morals will still be his guide, Bob’s revamped lifestyle will be completely updated for the nineties. Along with the slimmer midriff and freshly cleansed arteries, he will acquire his very own personal computer and cellular phone!

Die-hard double-deck cheeseburger fans can only guess what the Big Boy—or should I say “Trim Boy” will be toting next. A Tofu sandwich slathered with a generous slice of melted goat cheese? Soyburgers topped off with a fresh heap of sprouts? Seaweed Panini sandwiches on gluten-free bread? As the business of American roadside food moves into the 21st Century, we can only shake our heads and wonder what time and changing tastes have in store for the hapless Big Boy.