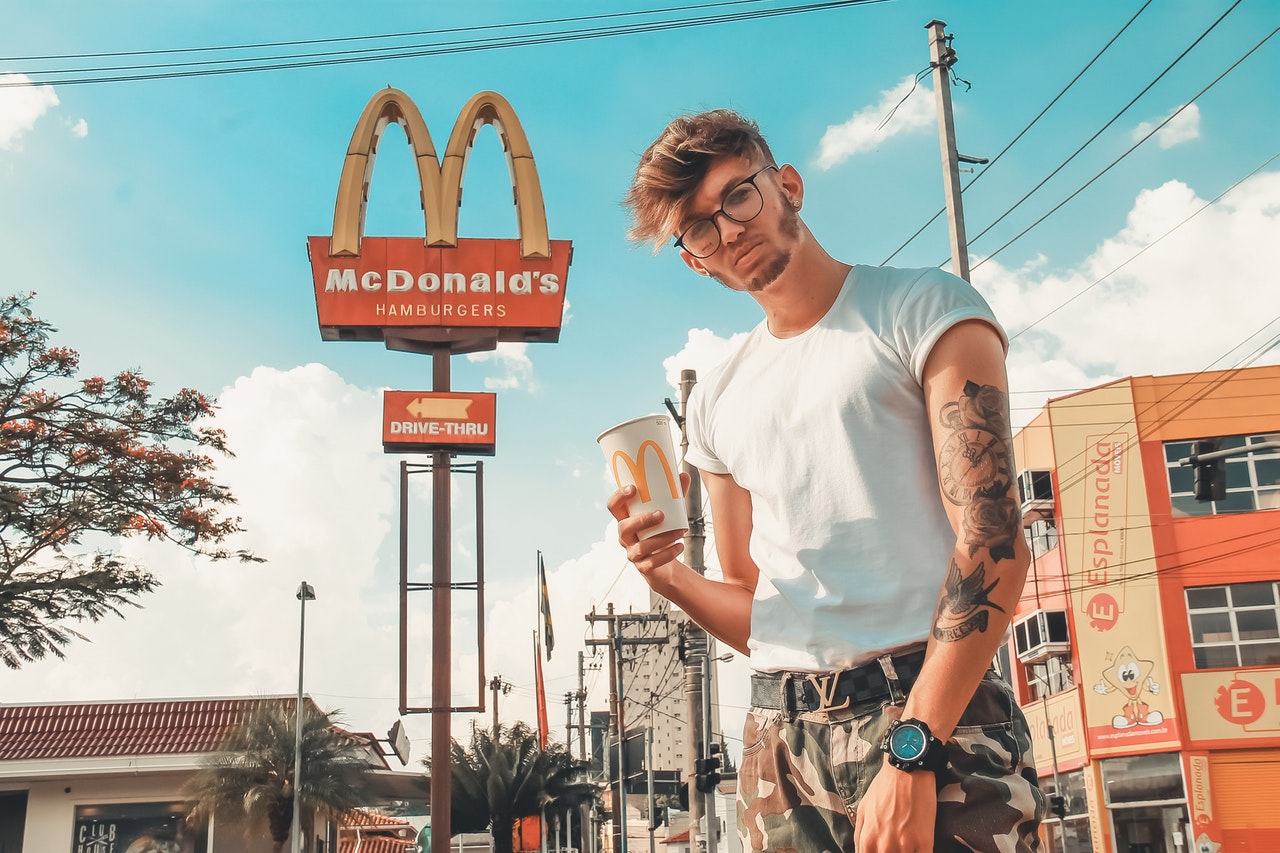 Richard and Maurice McDonald were planning to franchise their successful burger system in 1952. To stand above the visual noise created by miles of drive-ins, motels, car washes, bowling alleys, service stations, and coffee-shops—they decided a new structural style was needed. Without a unique design, nationwide recognition for their walk-up stand was an impossibility.

With this simple aim at the forefront, professional architects in Southern California were approached. A few interesting concepts were drafted for the brothers’ review—but unfortunately ... met with immediate rejection. Later described by Richard McDonald as “squatty looking boxes,” they exhibited a blatant lack of memorable charm or character.

Undaunted, the drawings were taken home for further contemplation. Then, while Richard McDonald pored over the plans in his office one rainy night—the arrow of inspiration found its mark. He had an idea! With limited talents as an artist and unbounded intuition about what a roadside stand should look like, he began to sketch some tentative plans.

First, the height of the building had to be lifted. Tapping into personal preferences, Richard penciled in a slanted roof—sloping gradually from the front to rear. Influenced by Colonial columns dominating his twenty-five room house, he included a few variations. Though imposing, they weren’t the elusive element he desired in a fast-food restaurant.

Next, he oriented a large semi-circle parallel to the front of the square building. It looked a little funny, so he discarded the idea and proceeded to draw two arches—positioning one of them at each side of the structure. This time, he arranged them perpendicular to where the road might be. As soon as he lifted his writing instrument from the paper at the bottom of the second arch, McDonald realized he had found the answer.

Swelled with the post-invention confidence typical of any vanguard, he presented Fontana architect Stanley Meston with the idea. Unprepared for the abstract incarnation of Coffee-shop Modern, Stan posed his question: “Dick, did you have a bad dream last night?” The garish arches assaulted his design sensibilities! He wanted no part of them—detailing their obvious impracticability to the brothers (amazingly, he would lay claim to the arch idea—decades later).

Unfazed by the response, McDonald stuck to his vision. He wanted those arches and would have them! If Meston wouldn’t work with the idea, then they would get someone else. Predictably, he eventually caught the vision and cooperated with sign maker George Dexter to amplify the golden wings with neon.

After further refinements were made, an eye-grabbing rendering was drawn up. Now, curved circles became taught parabolas—flaring gradually at their base. The upper portions of the dual yellow bands—along with the edges of the flying wedge roof, were rimmed with tubes of neon. Walls, striped with dramatic red and white tiles, jazzed the exterior.

Businessman Neil Fox and associates took the hook and became the first McDonald’s franchisee in America to construct the arched design. In May of 1953, the illuminated arches born on a scrap of paper finally came to life in Phoenix, Arizona. As they brightened the opening night with their futuristic energy, lines of customers were dazzled by the sight. To many, it was obvious that the age of drive-ins and carhop service ... was over. The amazing success story of Richard McDonald’s golden arches was just beginning.