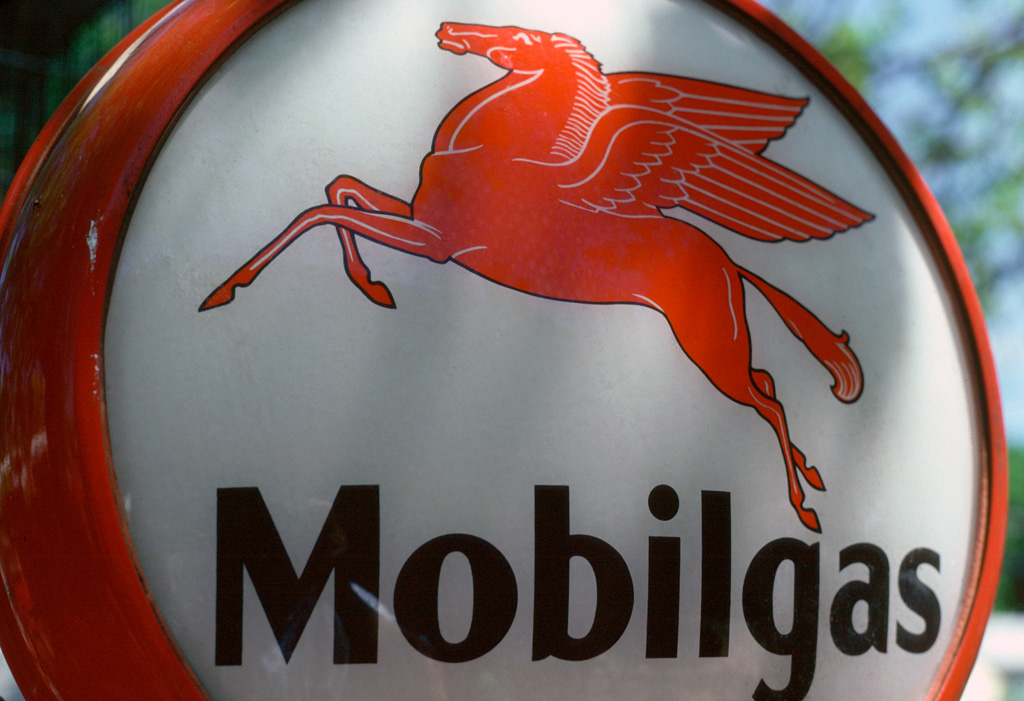 The Pegasus, Mobil’s dauntless mascot—it commands the motorist’s attention everywhere it’s seen. Blazing its way into the sky on a trail of hot neon or affixed to a station building in the form of pressed tin or enameled steel, it’s been a familiar brush stroke on highways such as Route 66 for well over fifty years. Within the category of petroleum trademarks, there has never been another corporate trademark like it, and there will never be again.

According to the Mobil Oil Corporation, the venerable “Flying Red Horse” was adopted as a logo in the United States shortly after the merger of the Standard Oil Company of New York and a company known as Vacuum Oil in 1931.

Prior to that, the Vacuum organization employed a highly stylized “gargoyle” to identify its line of lubrication products. After the corporate merger, a new identity was required in order to represent the joint products produced by the new refinery. After careful introspection and deliberation, a majestic red steed with wings was deemed the perfect choice to symbolize the idea of speed and power for the discerning consumers of automotive oil and gasoline.

Nevertheless, some historians report that the Pegasus made its first showing as early as 1911. That year, a Mobil predecessor in South Africa employed a white (outlined in black) rendition of the winged wonder to identify its refined liquids. Petroliana sources indicate that it was the Mobil Sekiyu division in Japan that first colored the four-footed equine red.

During the 30s, cowboy artist (and well-known commercial illustrator) Robert “Rex” Elmer totally revamped the horse, creating a much bolder, graphic version of the friendly trotter. The somewhat naïve outline of the early horse configuration was dropped as a further definition of the head, mane, wings, legs, and tail were added. The defining border lines were changed to white and the large body areas a fiery hue of crimson.

During the decades that followed, the airborne petroleum mascot continued to undergo gradual metamorphosis. The improved design received another subtle facelift in 1954 when the defining white lines were slightly thinned out—lending the trademark a little more streamlined sophistication. But even more dramatic was the new direction that was taken in 1965 when the entire beast reared up, flipped over, and began flying towards the right (perhaps a direct result of McCarthyism and the “red scare” of the 1950s). As the Mobil Oil Company entered the decade of the seventies and the eighties, the gallant red steed streaked ever skyward in a righteous—and patriotic—ascent skyward. By then, she had become permanently enshrined into the annals of the roadside service station and recognized as a true American icon.

At the same time, this move towards a more democratic direction was consummated, the fanciful curves exhibited by the original Pegasus configuration were reduced to their most elemental forms. With the implementation of architect Eliot Noyes’ extremely minimalist station designs (with their characteristic barrel-style gas pumps, circular overhead canopies, and backlit plastic sign discs), a new level of simplicity set the pace at the majority of Mobil service station outlets in America.

After so many years of service, the familiar red Pegasus fell behind the pack to assume a position of secondary importance. Now, thick blue letters spelled out the word “Mobil” up on the signs and replaced the favored equine as the dominant theme. The signature round “O” was the point of focus. The old red mare was only an afterthought, retired to tiny discs on the pump and rear-lit, dual office signs.

Much to the dismay of those who remember seeing the familiar red horse fly along the endless miles of Route 66 and gassing up at filling stations under its wing, Mobil’s gallant red steed was corralled up on the station wall, no longer the champ of its glory days. While it still represented the visual ideas of speed and power with pride, some of its original magic was lost.

No longer would it guide the motorist to the pumps with twists of red neon. Now, rendered impotent by a combination of vacuum-formed plastic, silk-screened ink, and fluorescent tubes, it was destined to spend its remaining days in quiet repose, reminiscing over the days when gas and oil was marketed by a whimsical cast of characters. Along the modern roadways, the times had changed. Horses, grizzlies, roadrunners, polar bears, buffaloes, badgers, eagles, and Indian Chiefs were now the forgotten mascots of the past.