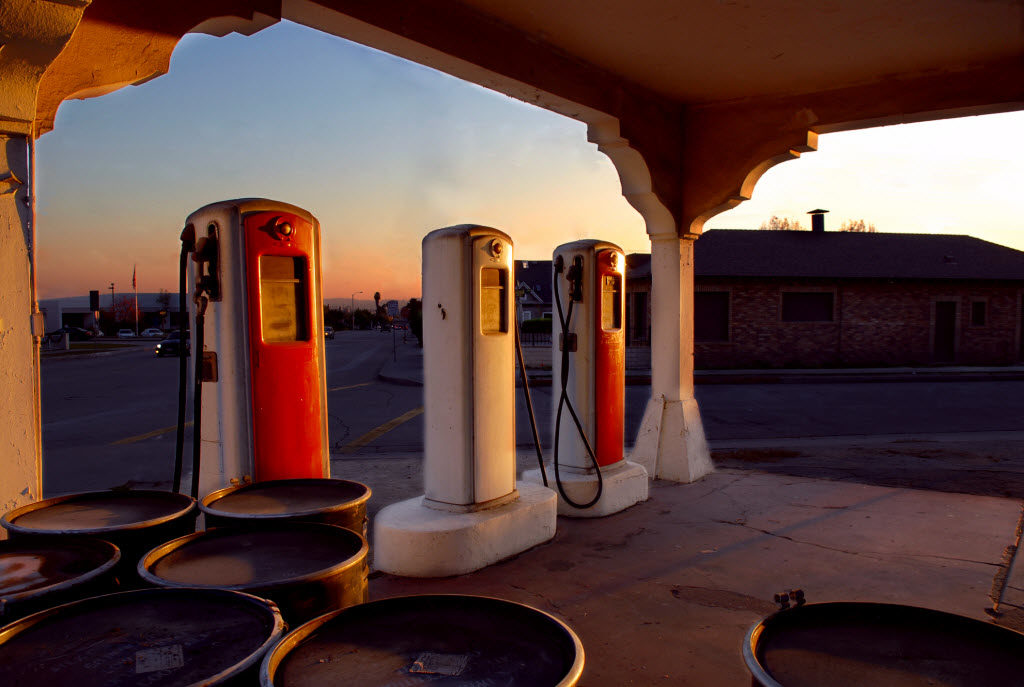 Combine the mileage driven on routes like Highway 66 to those traveled on the major interstates and you’ll discover that road-trippers rack up over 2.5 trillion per annum! To maintain this statistic, the U.S. motoring market consumes 146 billion gallons of gas every year. With so much refined petroleum being bought and then pumped into the tanks of cars, one might conclude that the Highway 66 motorist is entitled to a quantity discount. Unfortunately, today’s road trip enthusiast has no such influence. The prices at the pumps are outrageous and continue to climb. Even in the small towns along Highway 66, consumers shell out an average of $2.45 for every gallon of gas (and even that is an Ethanol blend).

What do we get for our money? Only the refined liquid, along with the privilege of dispensing it into our own automobiles. For good or ill, the gasoline station in America has adopted a business model that is defined by speed and self-service. Much to our chagrin, the present-day definition of “convenience” means do it yourself.

For this reason, today’s self-reliant automobile owner is burdened with a growing list of car-care responsibilities. In addition to pumping our own gasoline, we must check the level of motor oil, top off the radiator with water or anti-freeze, clean the windshield, change out worn wiper blades, replace dirty air filters, and keep our tires inflated to the correct air pressure. Never mind that it costs an extra seventy-five cents to extract air and water from a vending machine! That’s another story.

Travel back in time fifty years and you will quickly discover that the scene at the American service station was dramatically different than it is today. The most obvious difference? The price of gasoline. While economists argue that today’s cost per gallon is well in line with inflation and the current cost of living, there is really no denying that refined motor fuel was a good deal cheaper in 1955, no matter how you pump it.

Once upon a time in America, fuel efficiency was not an issue. Roadways like Highway 66 were packed with the biggest behemoths that Detroit could build—chrome-plated, fuel-injected, 283 cubic inch gas guzzlers. With an attitude typical of Alfred E. Neuman, owners of Ford Country Squire station wagons, Chevy Nomads, Buick Roadmasters, and other highway cruisers were unfazed about how much it costs to feed their greedy, four-barrel carburetors. “What, me worry?” Gas was plentiful ... and cheap! As miles of virgin tarmac unrolled to service the growing legions of Motor City steel, filling stations proliferated. By 1969, there were 239,000 gas stations in America (today, the total is less than 100,000).

The resulting competition caused a street side scramble, leading many American petroleum peddlers to adopt the tenets of “programmatic” architecture. Based upon the clever idea of combining both a building and a billboard into a single, eye-popping structure, this mimetic style of construction became the ideal motif for myriad roadside businesses—gas stations included.

Station owners eagerly adopted the format and almost overnight, the roadsides were transformed. From the 1920s and on, fantasy facades festooned the Highway 66 roadscape with visual whimsy. Along well-traveled corridors nationwide, gas stations shaped like airplanes, castles, Chinese Pagodas, dinosaurs, icebergs, lighthouses, tea kettles, teepees, and windmills made filling up the family flivver a lot of fun.

As it turned out, morphing the gas station’s appearance proved only partially effective in grabbing attention. Equally important was how people perceived the product being sold. This was demonstrated during the 1920s when tall “visible register” pumps allowed customers to see the gas they were buying. High atop the pump, a clear glass cylinder displayed the fuel before it went into a car’s tank. To differentiate between grades of gasoline and to enhance sales, companies like Gilmore colored their fuel, as they did with their “Blu-Green” brand.

Back in the “good old days” of gas, the Petroleum refiners selling on Highway 66 captured the public’s imagination by enlisting friendly mascots, too. The Brontosaurus affectionately known as “Dino” trotted onto the scene during the 1930s, boosting sales for Sinclair gas. In 1959, Humble Oil put a friendly face on it’s fuel with the stylized image of a tiger and the slogan, “Put a Tiger in Your Tank!” Standard Oil Company of New York’s (later Mobil’s) “Flying Red Horse” also grabbed its share of eyeballs: Affixed to buildings and sign poles, the neon Pegasus blazed a crimson trail across the sky and branded itself into the hearts and minds of Mother Road motorists.

But the affable nature of yesterday’s gas station was defined by more than personable mascots, wacky architecture, and cheap Ethyl (the first brand of no-knock, leaded fuel). It was the employee known as the gas station “attendant” who established a real rapport with the public, demonstrating first hand the art of personalized customer service. His or her mission was clear: refill customer’s fuel tanks, act as a tour guide, provide maintenance advice, and front as a goodwill ambassador for the oil companies.

To this end, pump jockeys of the gas station’s golden age actually looked like they cared. Sporting a crisp uniform—complete with a bow tie and five-point hat—the typical attendant rushed out to your car after the “ding-ding” of the driveway air hose signaled your arrival. After that, it was full service all the way. Attendants “wiped the windows and checked the oil,” inflated your tires, and made doubly sure that your car was roadworthy and safe to drive. Indeed, the memorable Texaco ad slogan, you can “Trust Your Car to the Man Who Wears the Star” was more than advertising hype.

Fifty years ago, gas station attendants along Highway 66 worked diligently to earn our trust. They used every promotion they could think of to hook in anyone who might buy a gallon of gas. Giveaways played a big part in winning over—and keeping—customers. In exchange for their loyalty, gas station visitors received goodies such as foldout road maps, drinking glasses, dishware, calendars, collectible coins, car washes, matchbooks, trading stamps (remember S&H Green Stamps?) and a multitude of other fun freebies.

Clamoring in the back seat to latch onto the latest giveaway, kids loved filling up, too. And why not? Station owners took pleasure in handing out trinkets to future customers. Coloring books, comics, coin banks, stuffed animals, stamps, buttons, pens, lollipops shaped like station logos, and other geegaws were the stuff kid’s dreams were made of.

Unfortunately, the passage of time has all but erased the memories of how enjoyable it once was to fill up at the service station of old. Now, foreign imports and fuel efficiency dominate the street. The station attendant has evolved into a cash register attendant and friendly mascots have been stylized out of a job. Station architecture has been revamped to conform with the banality of the mini-mart ideal. Gasoline is just another impersonal—and expensive—commodity.

Supersized for high-volume sales and maximized for profit, it isn’t likely that the gas stations of the present day will ever revive the lost art of the classic American service station. The ultra-modern convenience store—with its Big Gulps, triple lattés, and lottery tickets—will continue to define the market. Until “big oil” goes the way of Dino the dinosaur, the denizens of Route 66 have only one thing to look forward to at the pump: paying more for gasoline. “Fill ‘er up, ma’am?” Well ... at least the memories are free.