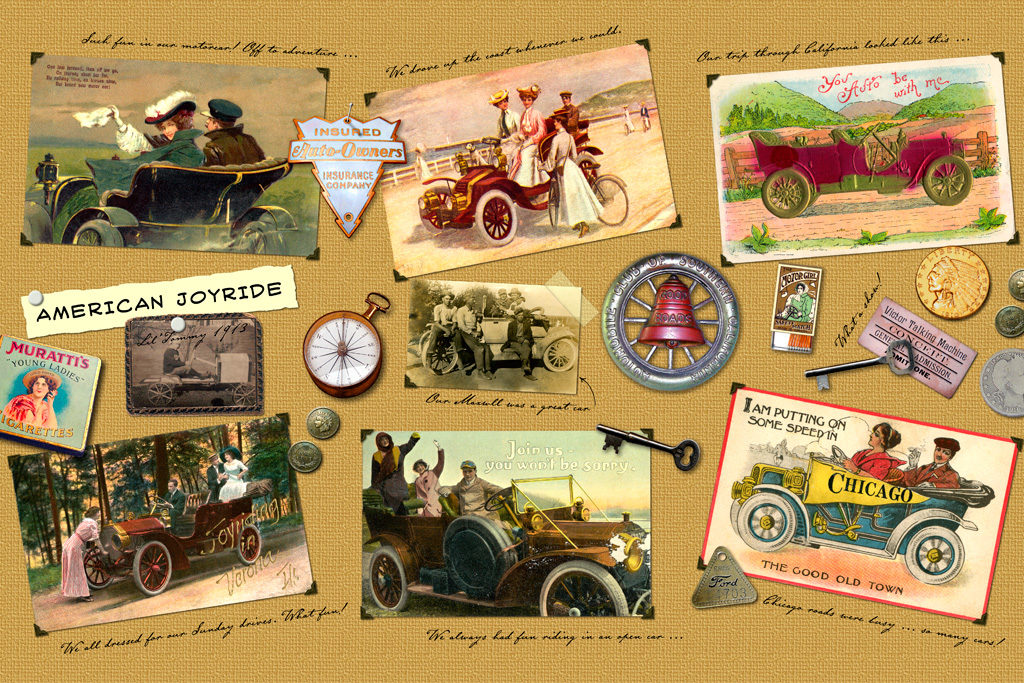 During the 1900s, motoring was a great adventure.  The love affair with the automobile had just begun and Americans took to the road with unbridled zeal. Unlike the present day, driving long distances was a big deal and taking a Sunday drive—much less a trip across America—was a major family event. A pioneering spirit pervaded motoring, a new form of four-wheeled “space travel” that demanded the good roads and smooth pathways that Highways like Route 66 would soon provide. 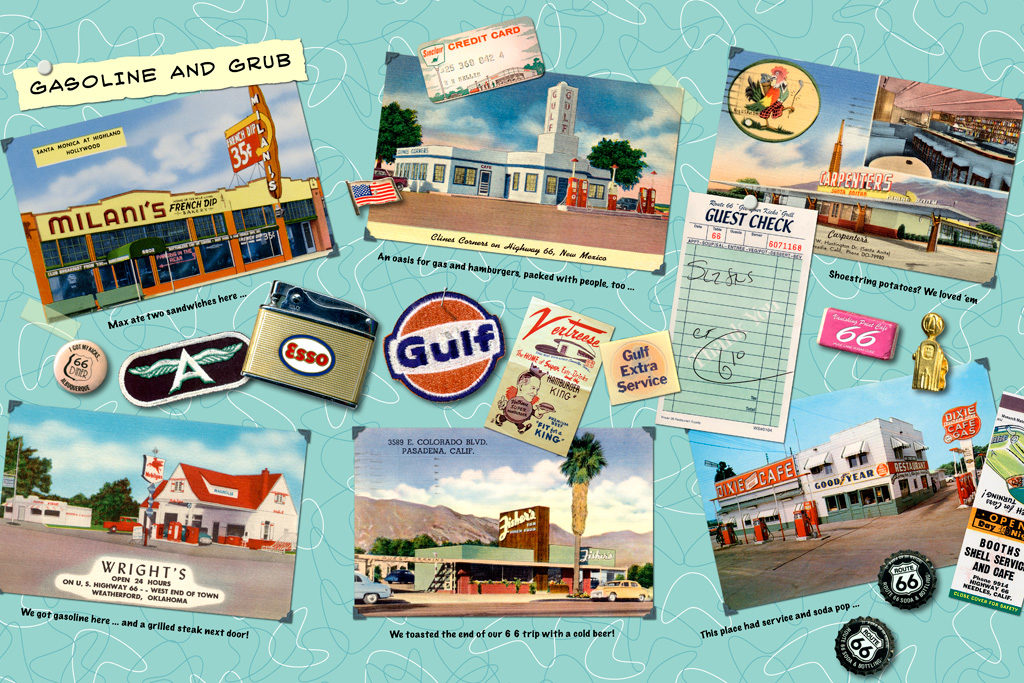 A major part of the Route 66 travel experience was to stop and fill up the family car with gasoline and conversely, one’s stomach with food and drink. Mom and pop restaurants like Carpenter’s, Milani’s, and Fisher’s were much-loved oases on the highway, satisfying hungry crowds with homemade food long before the fast food chains had gained their foothold along the great American roadside. When kids in the backseat cried “Are we there yet?” it was more often in reference to the next diner, greasy spoon, or filling station around the bend. 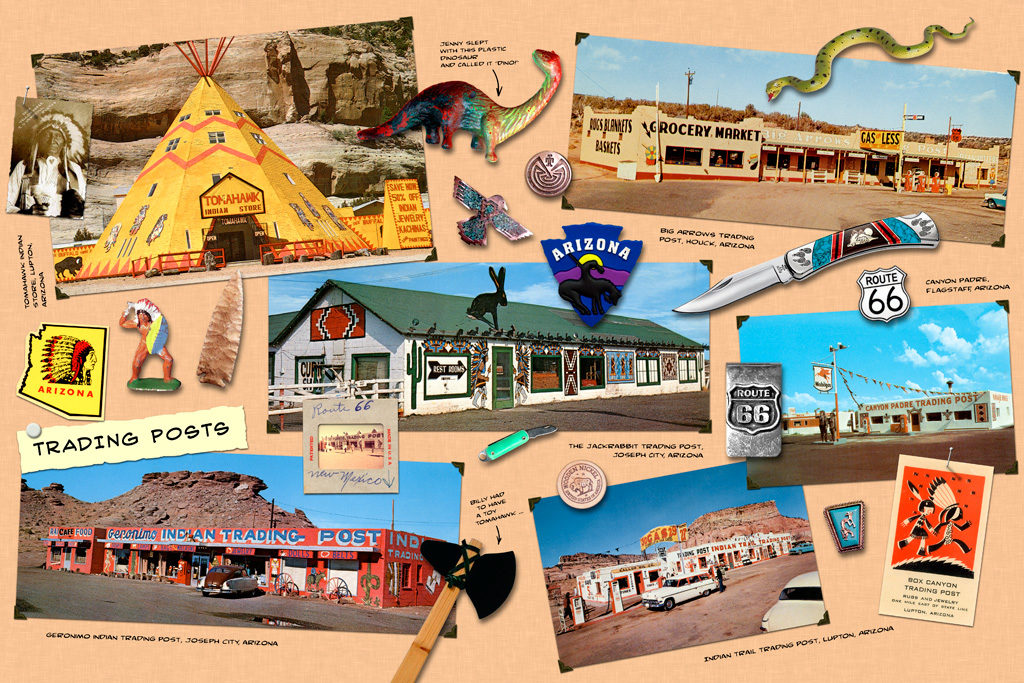 Bringing back remembrance of one’s trip along Route 66 was important and trading posts sprouted along the roadside to provide those souvenirs. Along Arizona and New Mexico 66, Native Americans satiated the imaginations of the tourists just passing through with geegaws such as rubber snakes, plastic tomahawks, petrified wood, and turquoise jewelry. Roadside traders like the Jack Rabbit, Geronimo’s, and the Tomahawk were a destination in themselves, pre-Disneyland wonderlands were kids of all ages gazed into a cornucopia of trinkets and treasure. 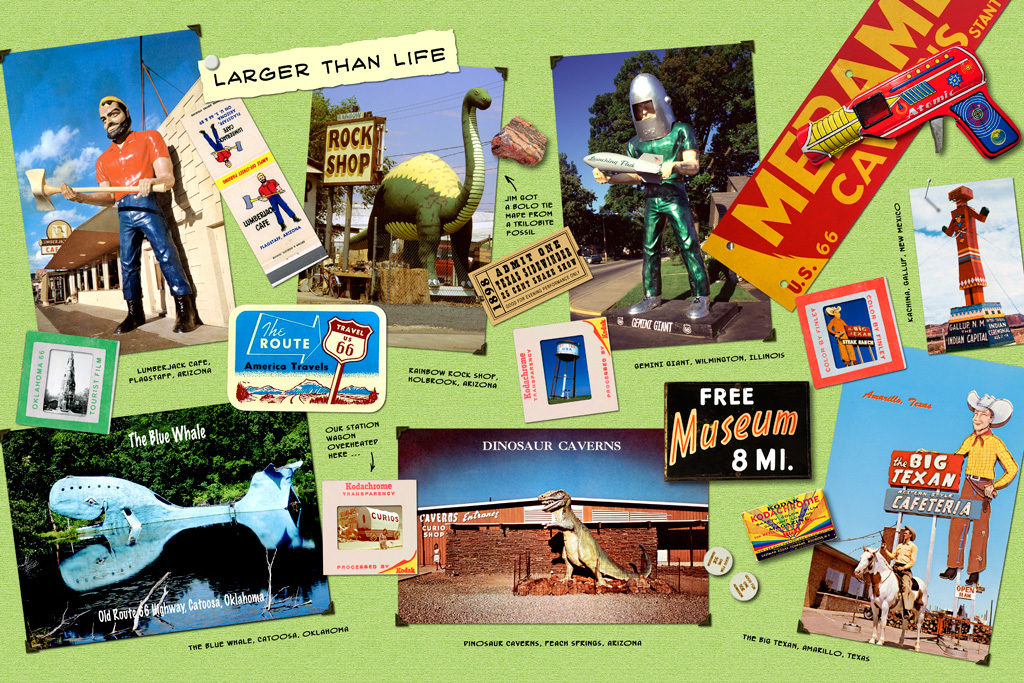 After World War II, Americans took to roads like Route 66 in great numbers and vacationing by way of the automobile emerged as the new kick. Dinosaurs, roadside giants, spacemen, blue whales, totem poles, snake pits, and Texans with ten-gallon hats lured travelers from the roadway.  Americans traveling on Highway 66 loved every minute of it. “See the U.S.A. in your Chevrolet” beckoned the familiar commercial jingle and Americans did just that—making stops along the way to get a glimpse of the larger-than-life attractions and roadside oddities that added a little bit of magic to the trip.