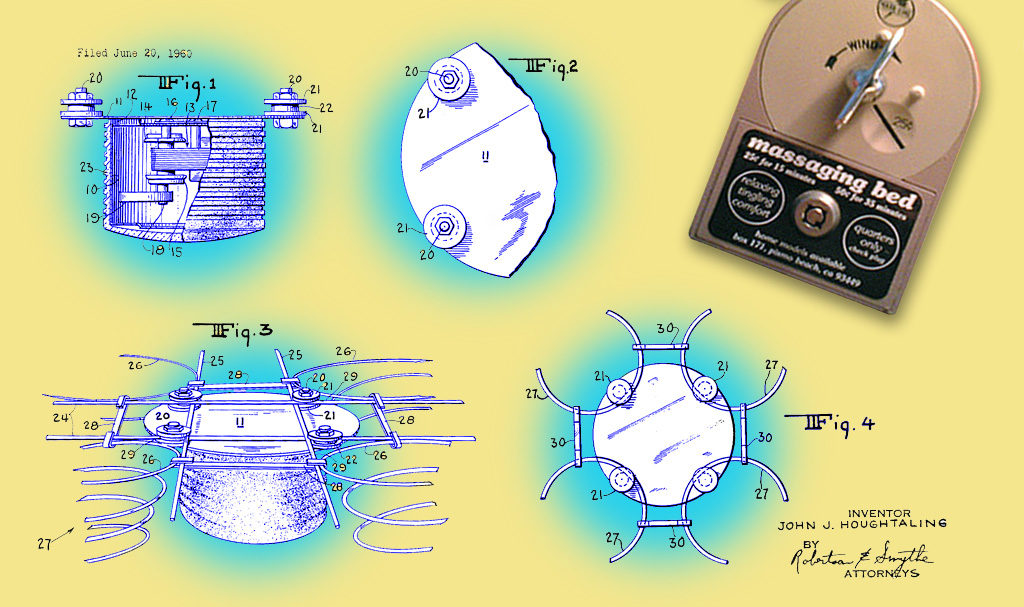 For almost two years, he conducted a relentless campaign of under-the-bed research. Mattresses were dissected, bedsprings analyzed, and motors monitored. After disassembling the mysterious motion transducer and studying its intricate workings, he discovered that “there wasn’t much to it.” Inside, what was initially perceived as a mechanized marvel consisted of nothing more than a simple electric motor with a small counterweight attached to the driveshaft.

Houghtaling began to tinker on his own and soon devised a much more reliable version. It was small, powerful, and a snap to replace. Best of all, his visionary design had a specific advantage over the existing competition: it could easily be mated with any mattress. Now, anyone handy with a screwdriver could install one of these new massagers—directly inside of a bed’s box spring! A quad arrangement of specially grooved mounting posts made easy work of attaching the vibrating module between the cushioning coils. The inventive Houghtaling even patented the unique design approach.

A compact control head (attached by a wire) held the loot and activated the magical oscillations. Bolted down securely (in later years) to the nightstand, it served as both a pay receptacle and housing for the timer. When sleepy lodgers dropped their quarter into the coin meter, it tripped a mechanism—providing fifteen minutes of operation. The setup worked without a hitch for a number of years until basic honesty went the way of the dodo. Suddenly, anyone and everyone (including some motel employees) began breaking into the coin meters to help themselves to the proceeds!

For the hapless distributor, the resulting losses proved to be quite substantial. During the heyday of Magic Fingers mania, over 250,000 units were buzzing along at both independent and major chain accommodations, nationwide. With an average of eight quarters collected by each unit during the time span of one month, an entrepreneur maintaining a few hundred vibrators could pull in a considerable chunk of change. Since Houghtaling didn’t demand royalties, top Magic Fingers salesmen could earn a good living.

By the 1970s, engineering changes were made to the box in an effort to thwart the pilfering. Now, room renters received a card from the desk clerk during check-in that was credited with incremental amounts of time. Back in the privacy of their rooms, a modified control head read the debit card and activated the Magic Fingers. Unfortunately, the costs incurred to continually upgrade the system with the latest technology proved prohibitive. Magnetic stripe card readers that were initially “high-tech” were soon rendered obsolete by the fast pace of progress.

Eventually, coin theft became such a problem that Houghtaling couldn’t sell distributorships with a clear conscience. Somebody would set up a business and effectively go broke in just a few months. But the Magic Fingers wasn’t licked yet: In the early 1980s, the General Stamping and Manufacturing Company of Hialeah, Florida acquired rights to the gizmo and began marketing it to residential customers. While demand from the motel industry waned, seniors remembered the therapeutic gadgets from their cross-country journeys and eagerly purchased them for home use (without coin meters).

Today, fully functional models of the venerable Magic Fingers mattress can still be discovered—and enjoyed—at a smattering of tourist courts, cabins, and no-tell motels along the retired miles of Highway 66. Along with “refrigerated air” and “television in every room,” Houghtaling’s shimmying shaker has found a place of permanence in the pop culture of the American road. And, oh yeah ... has anyone got change for a dollar bill?