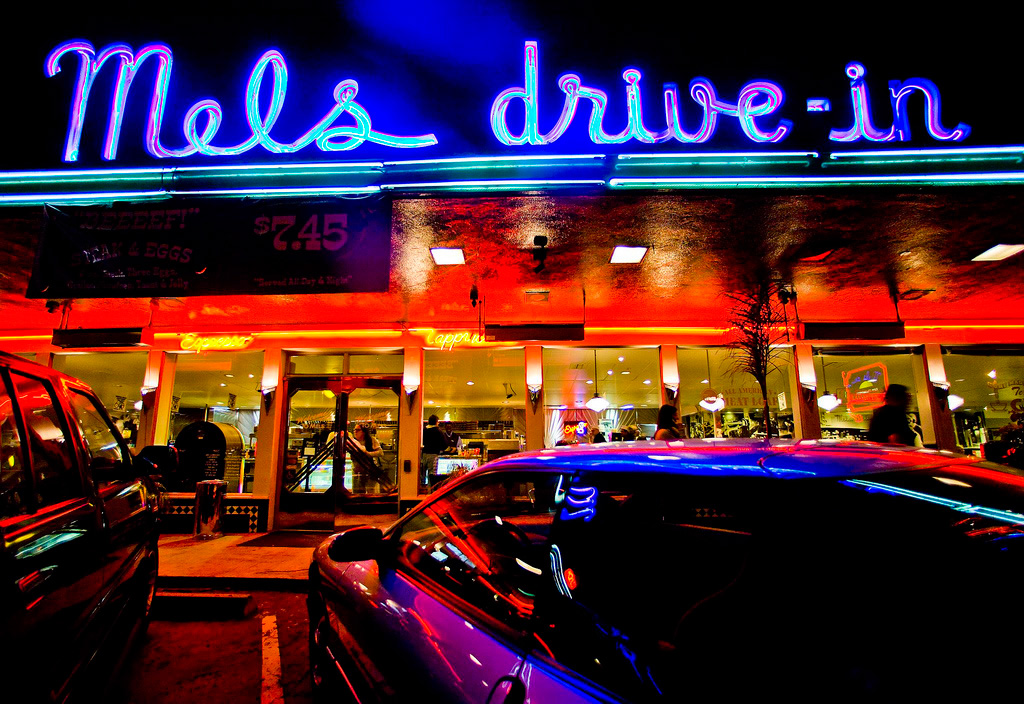 Tourists are generally unaware that along with the Golden Gate Bridge and its trolley cars, the city of San Francisco is famous for drive-in restaurants. Mel Weiss and Harold Dobbs started it all back in 1947 when they built their first carhop eatery, inspired by similar restaurants serving motorists in the Los Angeles area. With a staff of 14 carhops covering a 30,000-sq.-ft. parking lot, they lured the hungry car owner with a local radio personality broadcasting live. As music reverberated through dashboard radios in the drive-up lanes, the curb-stepping gals of 140 South Van Ness became a new paradigm for food service.

At all hours of the day and night, crowds of patrons who fancied dining-in-your-car came early and often. It didn’t take long for the first unit to multiply into 11! Six Mel’s drive-in restaurants became landmarks in the Bay Area, with an additional cluster achieving their own notoriety in the nearby cities of Stockton and Sacramento. They reigned for almost 20 years until a parade of franchised fast-food outlets finally outpaced their service. As the new serve-yourself philosophy began to reprogram attitudes about dining, Mel’s began its gradual decline.

By 1972, a New York restaurant conglomerate purchased most of the faltering units and changed their names. As colorful marquees were scheduled for removal, it appeared to many local enthusiasts that Mel’s success story was about to end. They were wrong! Around the same time, filmmaker George Lucas was scouting out locations to serve as a centerpiece for American Graffiti, his rock ’n’ roll fable about life, love, and coming of age in postwar America. The original Mel’s burger spot came to his attention and he leased it prior to its demolition. Crews descended on the site and soon it was lights, camera, action—all over again. Mel’s was back in business, soon to be immortalized in 35-mm. film stock!

Out on the parking lot, actors Ron Howard, Candy Clark, Richard Dreyfuss, Mackenzie Phillips, Harrison Ford, Cindy Williams, Paul LeMat, Suzanne Somers, and Charlie Martin Smith took their first big steps to future stardom. By the time the bulldozers roared in to raze the last remnants of the historic drive-in, and trucks carted off the debris, the movie American Graffiti opened in the theaters.

Thirteen years passed and eventually, the memory of the real cruisers who once haunted Mel’s had faded. Even so, Mel’s son Steven began to grow increasingly nostalgic about his father’s defunct dream. As memories of the Fifties replayed in his mind just like a jukebox record stuck in the same groove, he tried to dismiss the thought. A lifetime of experience in the restaurant business told him that any attempt to resurrect the Mel’s Drive-in format wouldn’t be easy—and his father agreed, actively discouraging him from the idea. Fortunately, Steven persisted. When future partner Donald Wagstaff confirmed interest with his own commitment, the path to reclaiming a northern California legend was clear. Mel’s Drive-in was going to be resurrected!

At the grand reopening in 1985, Steven’s fondest wishes were realized: Erstwhile teens who dined at the original Mel’s were now returning—with their families! Weary of tasteless road food, they wanted to show their kids a glimpse of what the “good times” were really like, long before video games and compact disc players. With the drive-in as a backdrop, customers related their early years of love and romance—how they first met at Mel’s, dated, and ultimately got married...

Mel’s was back on the charts with new locations on Frisco’s Lombard and Geary streets. Soon, two more units opened their doors in Los Angeles and were joined by full-scale replicas (complete with classic hot rods, custom cars, carhops, neon tubing, and food service) at the Universal Studios theme parks in Florida and California. Weiss had Mel’s name officially trademarked in 1985, and it continues to take on a life of its own.

And rightly so! After all, Mel’s Drive-in is the burger, the french fry, and the milkshake. It’s playing a joke on friends by unscrewing the top of the saltshaker and ketchup cap. Mel’s is the howlin’, prowlin’, Wolfman Jack ... the phase-shift echo heard when walking past a row of roadsters tuned to the same raucous rock ’n’ roll radio station. It’s the haunting sound of a Fender Stratocaster banging out the chunka-chunka rhythm of “Green Onions” while cruisin’ the circuit in a little deuce coupe—hair slicked back in a ducktail and a pack of Camels wrapped tightly in your sleeve. Mel’s is the generic haven for all those who love to eat in their automobile, a fitting tribute to the youthful hangouts fondly remembered from the days of yesteryear, along with one’s first car, first date ... and first kiss.