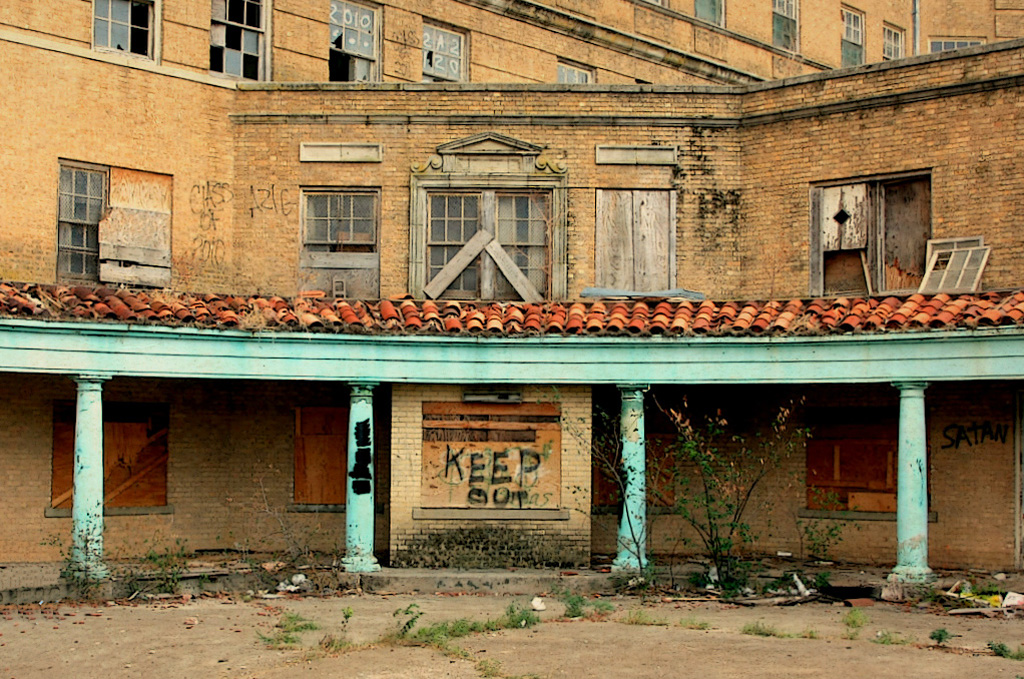 Today, the remnants of a once booming mineral water business can still be seen in the town of Mineral Wells, Texas. Originally built as a seven-story luxury resort, the Crazy Hotel is now a retirement home; the Milling Sanitarium a VFW hall, and the towering Baker Hotel—once the playground of screen stars, crooners, and oilmen—sits abandoned, a silent reminder of the times when the healing waters flowed.

When James Lynch arrived on this site in 1877, there was little indication that this area would one day become a magnet for visitors. Although the valley was beautiful and the soil looked productive, well digging wouldn’t release water from the earth. Stuck with eighty acres, the Lynch clan was forced to haul up water from the Brazos River. After three hard years of toting, a traveling well-driller arrived in town and struck a deal to sink a hole. But to everyone’s chagrin, the dig unearthed a foul-smelling liquid!

Necessity forced the family to overcome their aversion to the water and one by one they drank. After feeling no ill effects, they deemed it safe. Weeks later, something strange happened: rheumatism suffered by Mrs. Lynch had vanished! After word of the cure spread, throngs of health-seekers arrived at the farm. When the hundreds turned to thousands, Lynch drilled more wells and then built a town.

Eventually, the stampede caught the attention of speculators, including a colorful character known as “Uncle” Billy Wiggins. He purchased his own parcel of land and proceeded to cash in on the medicinal waters. According to town lore, a woman who was convalescing at the local sanitarium spent her days under the shade trees surrounding the well, sipping its effluent nectar. Resident juveniles nicknamed her the “crazy woman” and after she left town cured of mental distress, the curative spring assumed the “Crazy Well” name. Wiggins took advantage of the incident and added a pavilion and bottling plant.

In 1907, Sidney Webb purchased the Crazy Water Company from Wiggins, along with the four other wells. He went on to erect the town’s first luxury hotel, appointing it with modern bathrooms, elevators, telephones, and convenient access to the ever-popular mineral water drinking pavilion.

Inside the pavilion stood an elaborate bar that boasted four different strengths of Crazy Water. After filling up with drink, visitors could take their exercise on the “Fat Man’s Reducer.” This early version of the Stairmaster consisted of 1,000 wooden steps that wound up East Mountain. From a vantage point below, locals made a sport of spotting novices: The poor souls who dared ascend the stairs after over-indulging in Crazy Water often turned an about-face to beat a hasty retreat to the nearest toilet!

Tragedy struck in 1925 when the hotel and the entire downtown block was snuffed out by fire. One year later, Dallas businessmen Carr and Hal Collins stepped in to resurrect the Crazy and spent a million dollars to restore it. Ironically, the seven-story beauty they constructed prompted the locals to take aim at out-of-town investors. Determined to wrestle back control of their water rights, local citizens formed a committee to clear the way for an even more elaborate structure. Aided by reputable hotel magnate T.B. Baker, the new Baker Hotel would boast fourteen stories and four-hundred rooms!

Suddenly, the competition for tourists became an all-out war. To counter their lavish competitor, the proprietors of the Crazy Hotel installed a giant “Welcome to Mineral Wells, Home of Crazy Water” sign at each traffic access to town. On the rooftop, a gargantuan electric billboard was installed that flashed the Crazy name far and wide. Inebriated by the battle, many of the local shop owners incorporated the word into their names. By the end of the twenties, a plethora of “Crazy businesses” appeared, including the Crazy Laundry, Crazy Drugstore, Crazy Theatre, Crazy Drugstore, and Crazy Beauty Shop!

After the stock market crash, Carr embarked on a campaign to market the snowy white powder that remained after Crazy water evaporated. Healing packets filled with these Crazy Water Crystals could be easily shipped everywhere and were convenient. Hal Collins began extolling the crystals’ virtues on “One Man’s Opinion,” a live radio show broadcast from the Crazy Hotel. A wry mix of humor, country-wisdom, music, and product testimonials, the show stirred up sales of three-million dollars a year!

Unfortunately, principals at the Food and Drug Administration were listening in too. Suddenly, all unwarranted health claims had to be removed from radio spots and packaging. With extreme prejudice, the Collins brothers complied, removing the bromide that claimed the crystalline powder was useful in the treatment of “rheumatism, functional stomach diseases, cystitis, diabetes, and Bright’s disease.”

One year later, Crazy Water Crystals made a surprise appearance at Chicago’s Century of Progress Exposition. Hal Collins was in attendance and was drawn to a prominent display entitled the “Chamber of Horrors.” Here, all of the medicinal cures that resulted in blindness, hair loss, and even death were on display. To his surprise, a green-and-white box of Crazy Water Crystals was neatly tucked in among the profane. To make matters worse, photographs showed the Mineral Wells hotel and bottling plant!

Collins was aghast at what he saw and immediately had the Crazy Water Crystals removed from the exhibit. Unfortunately, the damage had already been done. Sometime later, the company was forced to add a warning label of precautionary advice that read: “Not to be used when abdominal pain (stomach-ache, cramps, colic), nausea, vomiting, or other symptoms of appendicitis are present. Continual use of any laxative may develop a systemic dependence on same.” Crazy Water was on its way out.

Despite the controversy that surfaced over the crystals efficacy, Collins never wavered in his loyalty. When he sold off the hotel and mineral water rights in 1947, he reserved a large cache of the crystals for himself. Every day for the next thirty-three years, he religiously consumed his daily dose. He passed away at the respectable age of eighty-seven, a valid example of the healthful benefits of Crazy Water.

Nevertheless, his final testimony went unrecognized. By the fifties, the heyday of healing waters in America—and Texas—had concluded. Most of the grand temples that were erected to celebrate the curative powers of mineral water had closed their doors and ceased operating. By 1958, the animated electric sign that once welcomed the throngs of visitors to Mineral Wells and the home of Crazy Water was torn down. Sold for scrap, it spent the last of its days among the rubble of a Dallas junkyard.