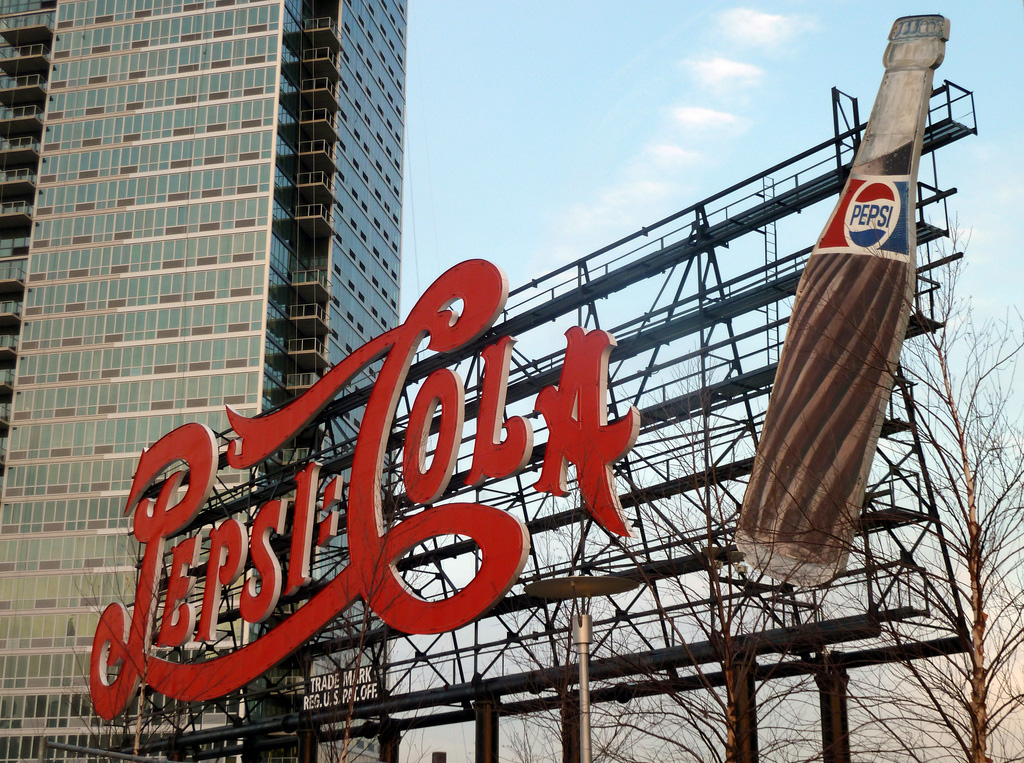 Before the turn of the century, pharmacist Caleb Bradham’s drugstore was a favorite gathering place for the residents of New Bern, North Carolina. In those days of horse-drawn carriages and gaslight, bottled soda refreshment was rare and soft drinks the domain of the neighborhood druggist. There, a stomach-soothing concoction known as “Brad’s Drink” became a favorite fountain mix, it’s taste energized by Bradham’s addition of cola nut extract and pepsin (a digestive enzyme that breaks down protein).

By 1898, Bradham realized that a drink capable of calming the gut and refreshing the palate had a grand future. To instill the beverage with more universal appeal, he decided to rename it by combining the keystone ingredients into one catchy combination, “Pepsi-Cola.” To gain legal recognition, he filed an application for the trademark in 1902 and one year later, it was officially registered on the books.

With the trademark registered, Bradham organized the Pepsi-Cola Company and initiated the task of developing and marketing Pepsi-Cola to the masses. With luck his ally, he filled the corporate coffers by selling thousands of gallons of syrup within a few short months. Two years later, the demand became so great that the construction of a syrup and bottling plant was a necessity. As fortunes rose like so many carbonic bubbles, a three-story office building was built to serve as the prestigious home office.

By the time Ford’s Model T rolled off the assembly line in an endless stream, over 280 franchised Pepsi-Cola bottlers were operating in twenty-four states! But there was trouble brewing at the bottom of the bottle: As the states entered World War I, the preeminent ingredient essential to the making of syrup began a roller-coaster price ride. Government controls temporarily held the price at five and one-half cents per pound, but the laws of supply and demand quickly forced the cost skyward. In 1920, sugar was trading for twenty-six cents per pound and it seemed people just couldn’t get enough of it.

To hedge against further increases, Bradham made the mistake of his life when he bought up large stocks of sugar at the exaggerated price. By December of that year, the cost of the crystalline commodity plummeted to the other end of the spectrum, bottoming out at one-half cent per pound! As an unfortunate result, the Pepsi-Cola Company was in the red for $150,000 and never recovered.

Bradham eked by for two more years until forced to contact the Wall Street brokerage firm of R.C. Megargel & Company, in hopes of salvaging the sinking company. Sadly, the reorganization plan was unsuccessful and Pepsi-Cola was declared bankrupt in March of 1923. One month later, Roy Megargel acquired the trademark and assets and formed the Pepsi-Cola Corporation as a Virginia company.

Mr. Megargel managed to maintain the company until the stock market crash of 1929, upon which he found it increasingly difficult to continue funneling money into the firm. Eager to unload the floundering enterprise he alerted Charles Guth, president of New York’s Loft Incorporated, to the impending bankruptcy. In 1931, the two men met in the Big Apple and agreed that Guth would finance the purchase of the Pepsi-Cola trademark, business, and good will. This third incarnation of pharmacist Caleb Bradham’s dream would become a Delaware corporation known as the “Pepsi-Cola Company.”

The deal proved heaven sent since fountain magnate Guth was currently at odds with his main syrup supplier, the Coca-Cola Company. At the time, Coke was being dispensed at all the fountains owned by Loft, including those operating under the “Mirror” and “Happiness” names. Because of the large syrup volume turned over at these soda bars, Guth felt that he should receive a substantial discount on the purchase of the flavoring. Coca-Cola officials disagreed and remained stalwart in their policy of not selling directly to retailers. Loft was denied a discount and the Cola wars had officially begun.

Guth fired the first shot when he pulled Coca-Cola from Loft’s 200 fountains and candy stores in the New York metropolitan area and replaced it with his newly acquired beverage, Pepsi-Cola. Despite the fact that there was an immediate business drop, Guth calculated that it was only a matter of time before Pepsi gained its own following. Unlike previous “cola” beverages, Pepsi-Cola remained as the one and only trademark to survive the infringement litigation of the Coca-Cola Company. The trademark was a valuable commodity—one that was sure to spell eventual success for anyone who could see it through.

But Guth wasn’t going to wait around for the public to get acquainted with the idea of a “Pepsi” Cola. While his stable of soda fountains provided admirable cash flow for the Pepsi-Cola Company, there was a more expedient way to introduce the drink to the rest of America. In 1932, Guth he came up with the idea to make a fancy, twelve-ounce bottle that would sell exclusively at the Loft outlets for ten cents.

Unfortunately, initial sales reports were disappointing and Guth began looking for a more influential inducement. He came to the conclusion that the depression-starved public could be easily enticed with a bargain. Instead of downsizing the bottle and reducing the price, he decided to sell the twelve-ounce sized Pepsi for only a nickel. “A nickel drink that’s worth a dime!” was a revolutionary idea for sales.

Guth knew that it wouldn’t be long before other soft drink conglomerates copied his scheme, so he concentrated on building up high volume through generous franchise bottling initiatives. The strategy worked and by 1936, the much heralded twelve-ounce bottle was being filled by 313 American bottlers. At the end of the thirties, Pepsi-Cola was occupying a sprawling manufacturing plant in Long Island City, New York. By then, the trademark script was registered in Canada, Cuba, and England and the sweet, stomach-soothing flavor with added pepsin was taking a substantial market share away from Coke.

To its advantage, the Pepsi-Cola Company managed to keep the “The Twice as Much for a Nickel” promotion going well into the year 1948! With a substantially cheaper price than Coca-Cola, a fabulous taste, and a visible foothold in the market, its zesty beverage ascended to the number two spot in the hierarchy of American colas. And why not? “Pepsi-Cola Hits the Spot, Twelve Full Ounces, That’s a lot!”