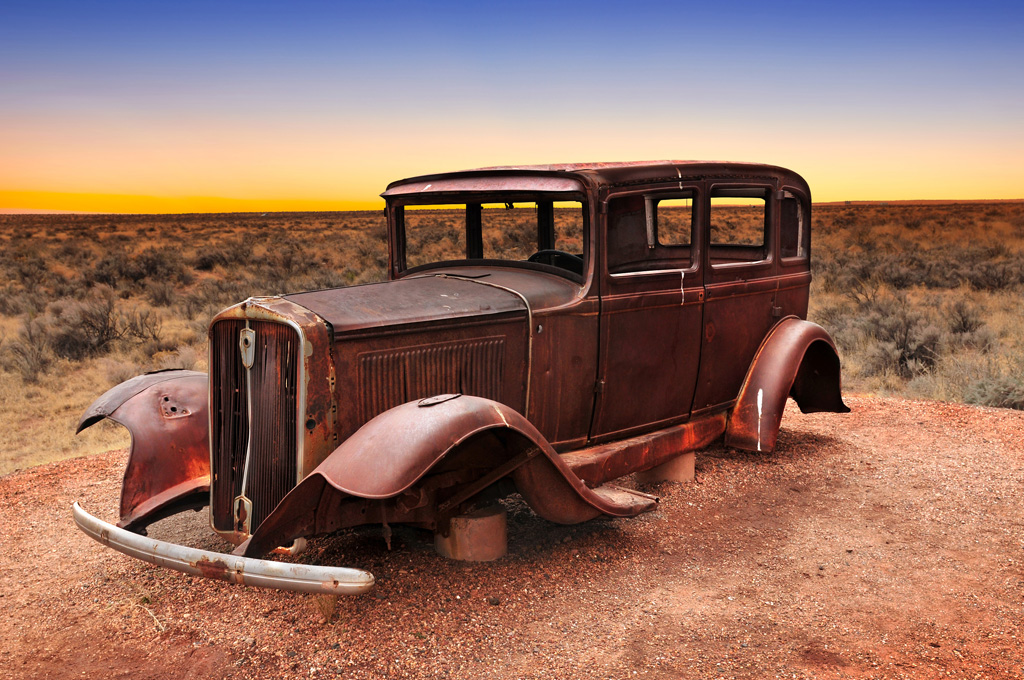 For Route 66 travelers trekking across the continent during the twenties and thirties, transportation by car was rife with problems. Tires went flat regularly, if they didn’t blow out! Engines threw rods, transmissions seized, and crankcases cracked. Mechanical components were prone to fail. But, nothing inspired more dread than a plume of steam billowing from a hot radiator.

There was a good reason: radiators of the era were delicate contrivances. Most were underrated for their applications. They were quick to overheat in traffic, during hot weather, and on steep inclines. The most inefficient designs exhibited thermal problems under marginal circumstances. Any wad of leaves or splash of mud resulted in restricted air flow. Certain automobiles of the age like the Wasp phaeton (with Continental T‑6 engine) added inherent design flaws to the equation: With no side ventilation louvers on the engine cowl, it overheated often.

In populated towns along Route 66 that were stocked with water and other amenities, these technical matters rarely aroused concern. However, when long-distance travel dictated the navigation of unpopulated regions of Arizona 66—especially over switchbacks as intimidating as the Sitgreaves Pass—desolate desert stereotypes dominated ones thoughts. So-called “last chance gas” stations didn’t waste time capitalizing on the worries. Many posted warnings imploring motorists to fill up with fuel and water. Billboards adorned with skull and cross-bones reinforced the message, conjuring images of stranded travelers dying of thirst.

To allay their panic, motorists traveling Route 66 relied on portable “water bags” to carry along extra liquid. Originally intended to transport drinking water for human consumption, cross-country drivers adopted these soft containers as an insurance policy for radiator boil-over. During the heyday of America’s maternal two-lane, the practice of topping off one’s bag before a long journey attained a near-religious fervor. It was a ritual repeated along the Mother Road’s entire 2,400-miles, rivaled only by gas tanks being filled with motor fuel.

While the design of the bags varied, the standard models were specially woven from Scotch Flax or “genuine imported” linen. For less than a one-dollar bill, the conscientious vehicle owner could purchase a sack from well-stocked service stations, auto supply houses, and general stores. Rectangular in configuration, the typical canvas container featured heavy border stitching and a removable cap secured from loss by string or chain. Some sported a flat, wooden carrying handle with hand hold. To facilitate easy hanging on the exterior of the vehicle, most came with a heavy-duty rope looped through eyelets.

On the exterior, bold graphics distinguished the competitors: the well-known Safari brand featured a roaring lion, Hirsch Weis a vaulting buck, and Water Boy a feathered native American. W.A. Plummer’s classic pick and shovel design flaunted the worrisome bromide, “Desert Water Bag.” Even the Pep Boys got in on the action! Speeding across the desert in a convertible, the grinning caricatures of Manny, Moe, and Jack appeared fearless as they hurtled across the no man’s land of sagebrush and saguaro.

It was an appropriate image since forward motion is what actually made the bags work. After filling with water, they began to perspire with moisture as liquid leached through the special strands of cloth. When draped outside of a window, slung over the hood ornament, or hung on the side-mounted spare, air rushing over their exterior created an effect likened to wind chill.  The intense evaporation caused contents inside the pouch to cool. So, instead of heating up to the outside ambient air temperature, water remained “cool and palatable.”

Despite the clever principles involved, the chilling novelty of the desert water bag eventually faded. For the thirsty that traveled Route 66, the insulated ice-chest and vacuum flask Thermos® became standard equipment for mobile dining. Automotive technologies advanced as well, resulting in the introduction of improved formulations for artificial coolant. Chemically protected in conditions hot or cold, engines evolved into efficient and powerful machines virtually free from the specter of thermal breakdown.

By the 1950s, the requirement to tote a dripping udder of water east and west along Route 66 was all but eliminated. Outmoded, the venerable water purse was tossed into the trunk, discarded, and gladly forgotten.