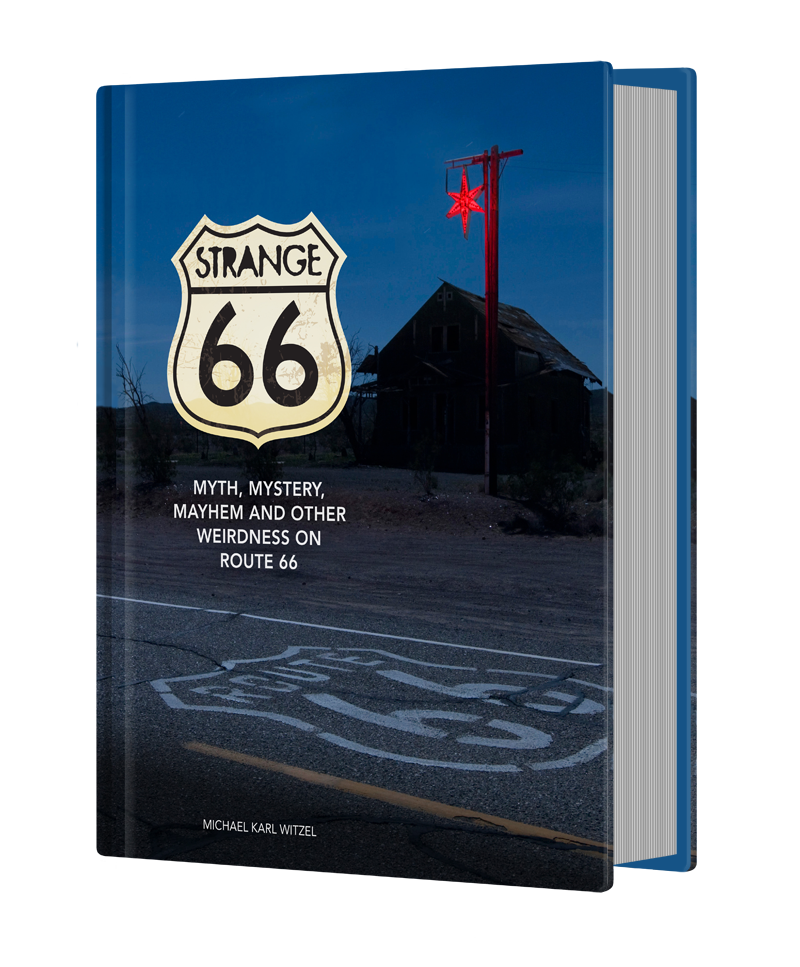 When you peer between the covers of Strange 66: Myth, Mystery, Mayhem, and Other Weirdness on Route 66, take a look beyond the all-American sheen of America’s Main Street to witness the seedy, creepy, and just plain weird stories behind this fabled highway. Suspend your disbelief for just one moment and prepare your mind for a journey into the unknown.

Unfortunately, America’s Mother Road wasn’t all about ruddy-cheeked, summer vacationers. Route 66 and the regions it traverses have a side more seldom seen, a strange underbelly, rich with weird tales (mimetic architecture, paranormal phenomena, and even cryptozoology) to the downright sordid and seedy (murder, mistreatment, and other assorted mayhem).

In the 208 pages of Strange 66, bestselling author/photographer and Route 66 authority Michael Karl Witzel explores the flip side of Route 66 to offer details on infamous Route 66 locations that once served as hideouts. Discover the famous caves where the infamous James Gang eluded the law (Meramec Caverns), the suburban apartment where Bonnie and Clyde shot it out with the cops (Joplin, Missouri), and the fortified flophouse “Scarface” Al Capone used for his illicit parties (Cicero, Illinois).

Also included are the stories of unspeakable crimes committed along Route 66, such as the Stafflebeck “murder bordello” in Galena, Kansas, and Arizona’s “Orphan Maker of Route 66.” Witzel also explores the people that passed through the region, including the Dust Bowl exodus and the Trail of Tears tribute in Jerome, Missouri.

Then there are the lighter, though still strange stories, such as the Route 66 Great Transcontinental Footrace and the origins of various roadside colossi, like the Blue Whale of Catoosa and Giganticus Headicus in Walapai, Arizona. And speaking of heads, what about steak? Eat one as big as your head at the Big Texan in Amarillo—and it’s free!

All of these stories culminate in a look at Route 66 unlike any other, completely illustrated with modern and archival photography and written by an acknowledged authority on the Mother Road.