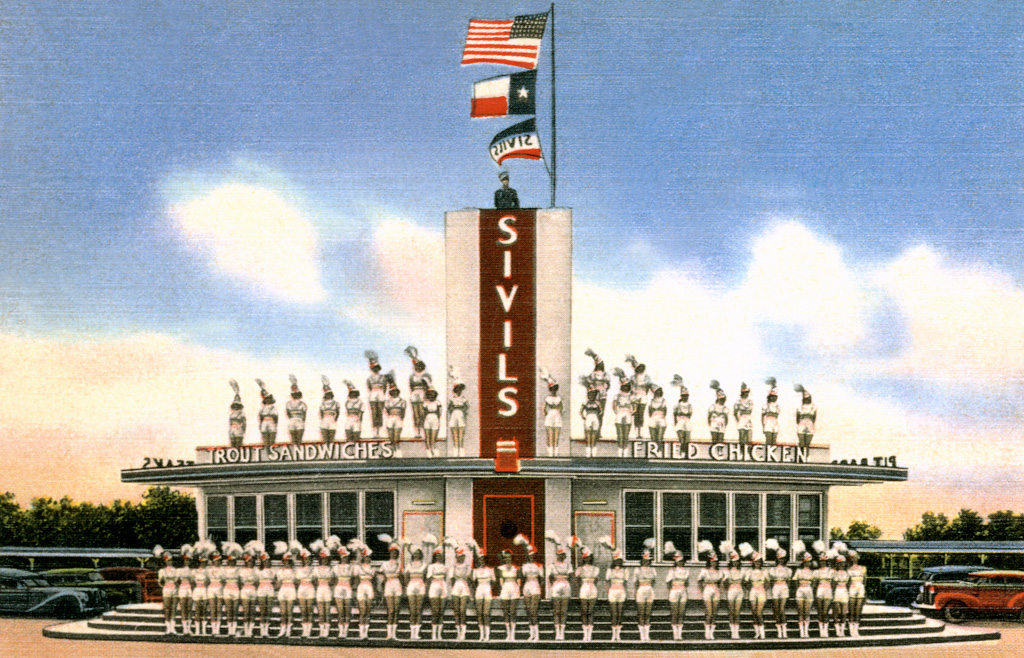 People in their cars are so lazy that they don’t want to get out of them to eat! The proclamation still rings as true today as it did when candy and tobacco mogul Jesse Granville Kirby first uttered the words in 1921. At the time, he was trying to interest Rueben Wright Jackson, a Dallas, Texas physician to invest in a new type of roadside restaurant, one based upon a revolutionary new format that would one day form the basis all “fast food” stands.

Kirby’s idea was simple: patrons would drive up in their automobiles and make food requests from behind the wheel. Acting as an order taker, a young lad fielded requests for food directly through the windows of the customer’s cars. Before engines had a chance to cool down, hot food and cold drinks were delivered right back out to the curb, lickety-split. The best part of it all was that diners could consume their meals while still sitting in the front seat of their cars!

In the fall of 1921, Texas “Pig Stand Number One” opened for business at the busy intersection of Highway 80 and Cockrell, in the Chalk Hill area of Dallas. Dine-in-your-car convenience had arrived, starring a new-fangled creation dubbed the “Pig Sandwich.” Prepared with slices of tender roast pork loin, pickle relish, and barbecue sauce, the hand-held motoring meal gained a loyal following among Cowtown commuters and Dallas drivers. Most Texas counties were dry in those days, and an ice-cold bottle of Dr Pepper (invented at a Waco drug store) provided the refreshing pick-me-up.

But the portable BBQ cuisine wasn’t the only draw at America’s first curb service café. The energetic waiters who worked the curb—or “carhops” as someone coined the phrase—were a sight to behold. “They were all young boys, probably twelve to fifteen years old,” recalls Richard Hailey, present-day heir to the Pig Stand throne and acting president of Pig Stands, Inc. “Hustle was the name of the game. As soon as they saw a Model T start to slow down and turn tires towards the curb, they’d race out to see who could jump up on the running board first while the car was still moving.”

With a serving technique more akin to rodeo trick riding than waiting on cars, the legend of the Texas carhop grew. And so did the notoriety of the Pig Stand’s signature sandwich. “Give a little pig a chance and it will make a hog of itself,” Kirby was known to say, and he was right: Driven beyond the Texas borders by one of the first franchising deals in the industry, the number of stands multiplied. Between 1921 and 1934, more than 100 outlets were serving up “America’s Motor Lunch” in Alabama, Arkansas, California, Florida, Louisiana, Mississippi, New York, Oklahoma, and Texas.

Inspired by Kirby and Jackson’s triumph, restaurateurs in Fort Worth, Dallas, and Houston copied the alfresco format and cashed in on the ranks of hungry car lovers for themselves. There was business a‑plenty. By the end of the 1920s, vehicle ownership had increased from six million to twenty-seven million motorcars, nationwide. From the Texas panhandle to the coastal plain, potential customers cruised the highways and byways, eyeing the roadsides for a fast and flavorful place to eat.

In 1938, Houston motorists discovered good food served fast after restaurant owner J.D. Sivil and his wife Louise opened their first curbside canteen. Before the first ‘burger hit the griddle, Louise demonstrated a real knack for running a roadside stand. First, she hired female “car-hostesses” instead of male carhops. For twenty-five cents an hour (plus tips), they served the car crowd a revved-up power menu that included fried chicken, sirloin steak and trout sandwiches. Next, she called her place a “drive-inn,” because she thought “hamburger stand” sounded too low-class.

Sivil was equally discerning when hiring carhops. Well aware that it was pretty girls that attracted the drive-in trade, she selected girls from an exuberant crowd of applicants, eliminating all those who weren’t between the ages of eighteen and twenty-five. But there was more to it than just age: To join the team, a prospective Sivils girl had to have a good figure and a “come hither” personality! Applicants had to have brains, too—along with a high-school diploma and health card.

Only a lucky few were invited to join the Sivils drive-in spectacle. “Houston Drive-in Trade gets Girl Show with its Hamburgers” is how a 1940 issue of Life magazine described it—and they weren’t exaggerating. Every night, it was the same review. At shift change, loud music spilled from the loudspeakers as the entire crew of carhops filed in to end their day. Immediately thereafter, a new crew paraded out and assembled in a grand chorus line to wait for inspection. Sivils personally checked them over to make sure their form-fitting satin uniforms were clean and that their cowboy boots were polished. Only then were they released to take the orders and serve the food.

But this one-of-a-kind drive-in setup was only a preview of coming attractions. Two years later, the Sivils proved that “everything is bigger and better in Texas,” especially drive-ins. In 1940, they opened a second curb stand in the Oak Cliff suburb of Dallas, at the intersection of Westmoreland Avenue, West Davis Street, and Fort Worth Avenue.

In the vernacular of the times, the Dallas location would be categorized as the “cat’s meow.” It featured north and south curb service, three acres of parking and a small movie screen. A serving staff of 105 carhops and three motor-scooter riding cigarette girls tended up to 500 cars at one time! It was so big, that a “general manned the building tower to direct the carhops to new arrivals. When customers pulled into their spot, a caller relayed their location over a P.A. system,” explains Buna “Johnnie” Van Hekken, former Sivils cashier. Sivils was the talk of the town; the drive-in was at its zenith.

Over the next half-century, the drive-in restaurant charmed the public. In Texas towns both small and large, it provided a venue for young people to meet, eat, socialize ... and show off their wheels. As the art of curb service seduced California, Michigan, and many other Midwestern states, drive-in operators duplicated the successful Sivils and Pig Stands formula, spinning off multiple variations on the theme. Imitators tried everything they could to grab the motorist’s attention—including hiring all blonde carhops, tall girls, installing air-conditioning tubes to cool your car ... and even putting the gals on roller skates!

Flash forward more than fifty years and one can still see the influence that Sivils and Kirby had on the business of roadside food. To the good fortune of Texas motorists, a handful of Texas Pig Stands continue their porcine BBQ rituals in Beaumont, Houston, Lytle, San Antonio, and Seguin. “These days, diners can still get an oversized piece of Texas Toast, giant onion rings, a milkshake, and a tasty Pig Sandwich,” explains Richard Hailey. “The best part is that we still sell the very same Pig Sandwich, made the same way that is was made, so many years ago.”

Sadly, the great Sivils locations are gone now, but Sonic—America’s only national drive-in chain—carries forth the customs with gusto. Today, it boasts over 850 locations in the Lone Star state with carhops that still deliver the food to cars the same way they did during the drive-in’s heyday. Although the running boards are history and the uniforms are more casual, you can still see them gliding between the cars on roller skates, delivering window trays stacked high with burgers, fries, and Cokes. The personal service that only a carhop can give—smiling and treating the customer right—never goes out of style.

The proliferation of cookie-cutter, drive-thru burger joints hasn’t affected the mom and pop drive-ins either (according to Hailey, California Pig Stand No. 21 pioneered the “drive-thru window” in 1931). With names like Bar‑L, Bun n’ Barrel, Chip’s, Fran’s, Frosty, Health Camp, Jo Jo’s, Keller’s, Prince of Hamburgers, Snapka’s, Theo’s, Top Notch, Wagon Wheel, and yes—even Pig Stand, the Texas drive-ins we remember from the cruisin’ days of our youth continue to attract us with the buzz of glowing neon, sizzle of grilled beef and savory aroma of beer-battered onion rings.

The fact is Texans still love to eat in their cars. For drive-in aficionados, there’s nothing that compares with having breakfast, lunch or dinner while seated in their favorite dining room: the front seat of their car. Cool cars, great food and good times define the Texas roadside—the birthplace of carhops, curb service and the Pig Sandwich.