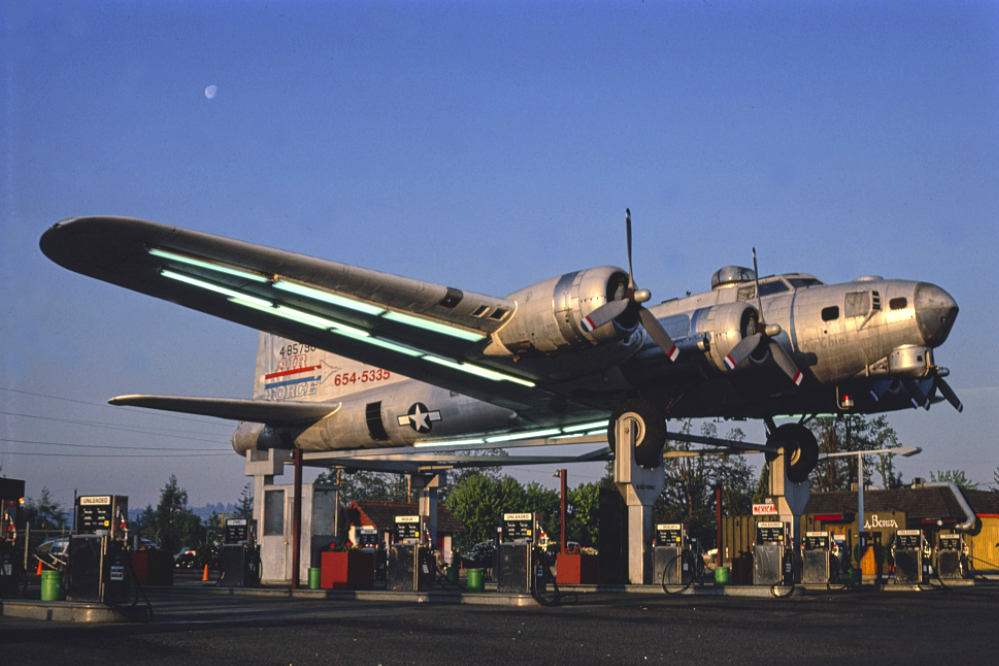 In 1947, Art Lacey opened a small, five pump filling station along Highway 99E in Milwaukie, Oregon. It was the same year he had his biggest—and his best—idea: Why not mount a full-sized, four-engined airplane on top of a roadside gas station business?

When he heard that the military was scrapping a few WWII leftovers that never saw any active duty, he hightailed it to Oklahoma’s Altus Air Force Base to check out the grounded surplus. There, he laid eyes on the three-dimensional billboard he was dreaming of: a Lockheed B‑29 Superfortress! When he learned just how much it was going to cost, he opted to go economy. At the “bargain basement” price of $13,750, the slightly smaller (and just as impressive) B‑17 model was really a much better buy.

With the assistance of some local farmboys, the craft was unpickled and readied for the journey home.  There was only one problem: Lacey didn’t have a pilot’s license!  During the war, he was an engineer and had garnered only eight hours flying time in a single engine craft.  Despite this wrinkle, the reward of perching a full-sized bomber on a gas station was too great to let formalities tie him to the ground.  Lacey would take the controls anyway.

Still, there were regulations to satisfy, so he plopped a flight cap on a mannequin and strapped it into the copilot’s seat! Despite the bravado, his first test flight proved unsuccessful and ended in a “wheels up” crash. His second airplane was a loss as well—totally trashed in a balls-out belly landing. Fortunately, both were written off to “wind damage” and a third ship was prepared for flight. With a little luck and a lot of prayers, it proved to be the charm.

This time, Lacey took a few extra precautions along with two pilot friends (real ones) with him. They got underway without a hitch but had some harrowing encounters en route. A blizzard over the Sierra Nevadas was the worst, equaled only by missing the mountains by mere inches. At one point the team was so lost that they had to buzz a town in order to read the street signs.

Amazingly, they somehow managed to make it to Troutdale, Oregon in one piece. There, the last leg of the trip proved to be the most difficult. No one would issue a permit to move the plane across town! Having come too far to give up his grand plan, Lacey simply strapped the monstrosity on top of four trucks and rolled it to the station site. The overwide load netted him a fine for ten dollars.

Compared to the future income produced by the station, the amount was laughable. In the decades that followed, the Bomber annihilated the competition and grew to become one of the nation’s première station attractions. At the height of its glory, a phalanx of forty-eight computerized pumps churned out motor fuel at the rate of five million gallons per year! Lacey made a fortune.

Eventually, though, even the Bomber ran out of airspace. On June 6, 1991, its flight plan was canceled. Faced with a new wave of competition from quickie gas markets and a whopping cost of $250,000 to replace the underground storage tanks, Lacey turned in his wings. The famous “bomber complex” would continue to serve with its motel and dining facilities, but the petroleum pumping operation made famous by its static, B‑17 Flying Fortress closed its bomb bay doors for good.