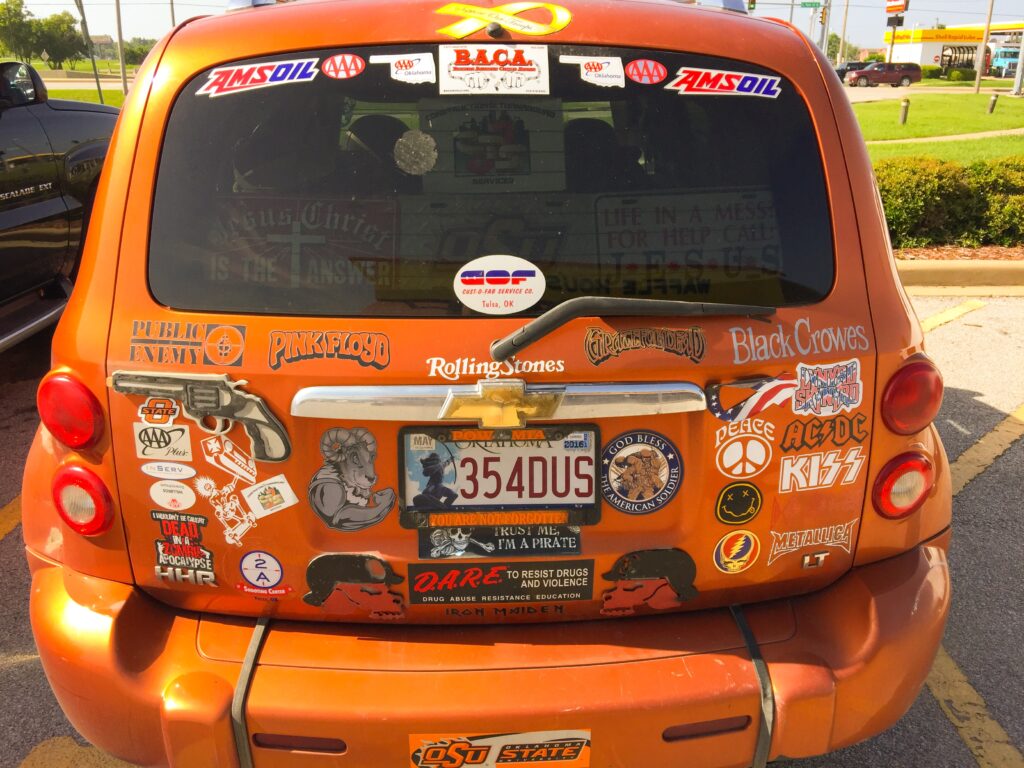 Regarded by pundits as cheesy and lowbrow, the bumper sticker is living proof that businesses can get customers to paste a miniature billboard promoting their establishment on their bumper, trunk lid, or car window. As mini-billboard, it pre-dates imprinted T‑shirts, urinal ad space, and web banners as a medium to display a variety of political, social, and marketing messages.

According to some sources, the first bumper stickers appeared in America during the 1950s, but it’s likely that they were used much earlier than that. Originally, they weren’t “stickers” at all, but brightly silk-screened cards made of heavy paper stock. When car customers weren’t looking, parking lot minions attached them with small wires that were twisted around the bumper.

As printing and adhesion technologies improved in the 1960s, the thin wires were replaced by pressure-sensitive, sticky-back material. Waterproof inks and durable vinyl were a good match for the temperature fluctuations of a car body. The new stickers were also fun to apply, notwithstanding the difficulty encountered peeling off the protective backing, the trapped air bubbles, and carmelized glue that ruined a car’s paint job a few months later.

During the heyday of bumpers, when massive chrome bulged from each end of the frame, the bumper sticker found a welcome home on the American car. Front and back, there was plenty of real estate for advertising, enough room to brag that “I Swam With the Mermaids in Weeki Wachee, Florida” or to entreat other motorists to “See Rock City!” There was even enough space left over to slap on a bumper sticker to promote your favorite political candidate.

But who needs an automobile? A bumper sticker sub-culture has emerged in America, one that doesn’t even need a bumper to display its amusing missives. On the Internet, the sources for curt one-liners, double-entendres, and biting commentary are more numerous than Deadhead stickers on a Cadillac. Online newspapers feature “bumper stickers we would like to see, while joke sites list endless categories of bumper sticker humor.

For the bumper sticker aficionado, do-it-yourself options are unlimited. All one needs is a PC with a color printer, a 7‑pack of bumper sticker sheets (available at the local office supply), and a funny slogan. Within moments, you can plaster your pickup truck with funny phrases like “Keep honking, I’m reloading” or “Don’t drink and drive ... You might hit a bump and spill it.

Yes, for all you folks following in the cars behind, be warned: the bumper sticker is alive and well in America and here to stay, whether we like it or not. Take a hint buddy, and hit the brakes: “If you can read this message, you’re too damn close!”