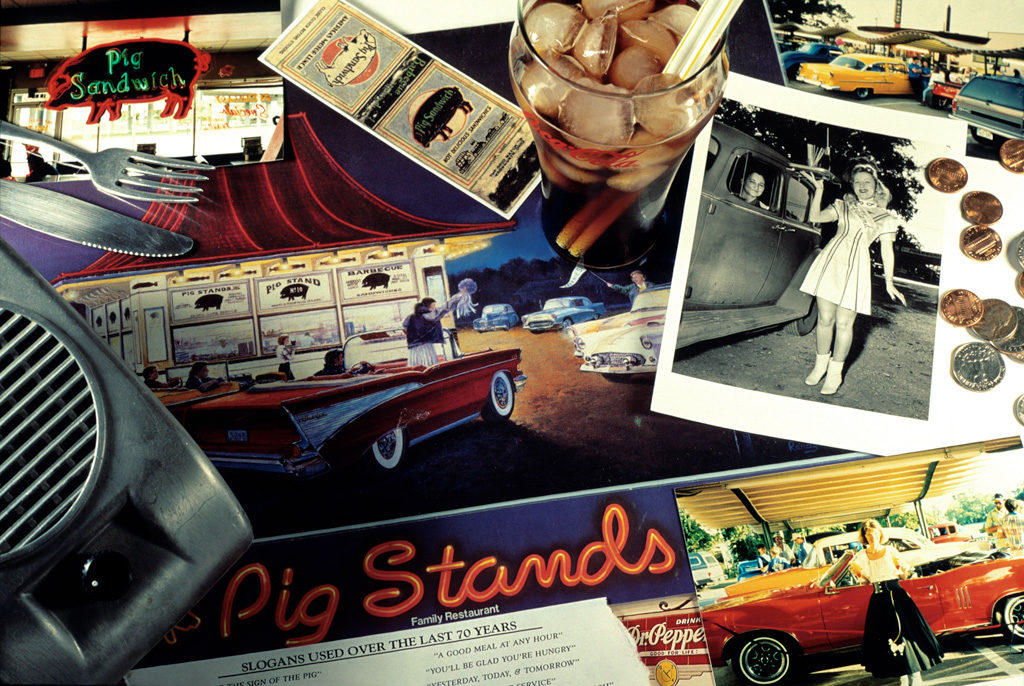 People in their cars are so lazy that they don’t want to get out of them to eat! The proclamation still rings as true today as it did when candy and tobacco magnate Jessie G. Kirby first uttered the words in 1921. At the time, he was trying to interest Rueben W. Jackson, a Dallas, Texas physician to invest in a new idea for a roadside restaurant—a “fast-food” stand, although at the time he didn’t call it that.

Kirby’s idea was simple: patrons would drive up in their automobiles and make their food requests from behind the wheel. A young lad would take the customers’ orders directly through the car’s window and then deliver the food and beverages right back out to the curb. The novelty of this new format was that hurried diners could consume their meals while still sitting in the front seat.

Of course, the Roaring Twenties were ripe for such a brazen idea. Adventurous folk perched atop flagpoles danced the Charleston at around-the-clock dance marathons and consumed bathtub gin at the speakeasy. During Prohibition, freedom of travel emerged as the new thrill, fueled by automobile ownership that soared from six million to twenty-seven million motorcars by decade’s end.

When Kirby and Jackson’s Texas “Pig Stand” opened along the busy Dallas-Fort Worth Highway (West Davis Street) in the Fall of 1921, hoards of Texas motorists tipped their ten-gallon hats to “America’s Motor Lunch.” Here was the ultimate dine-in-your-car convenience—starring Kirby and Jackson’s newest hand-held creation, the “Pig Sandwich.” Prepared with tender slices of roast pork loin, pickle relish, and barbecue sauce, it quickly gained a loyal following among harried commuters and carefree joyriders. A frosty bottle of Dr Pepper (invented at a Waco, Texas soda fountain) accompanied the motoring meal.

But the tasty curbside cuisine wasn’t the only attraction at America’s first drive-in restaurant. The flamboyant car servers who worked the curb—or “carhops” as someone coined the phrase—were a sight to behold. “All the carhops were young men, probably 12 to 15 years old,” recalls Richard Hailey, successor to the Pig Stand throne and acting president of Pig Stands, Inc. “They were very competitive. As soon as they saw a Model T slow down and turn tires towards the curb, they’d race out to see who could jump up on the running board first while the car was still moving.”

With its good food and derring-do curb service, the legend of the carhop grew as the reputation of the Pig Stands and its signature barbecue sandwich spread. Propelled beyond the borders of Texas by one of the first franchising arrangements in the industry, the number of restaurants multiplied quickly. Between 1921 and 1934, more than 100 Pig Stands were serving up “A Good Meal At Any Time” in Texas, California, Louisiana, Mississippi, New York, Florida, Oklahoma, Arkansas, and Alabama.

As the demands of the American automobile owner changed, fast food innovation shaped the Pig Stand legacy. According to Hailey, “It was California Pig Stand No. 21 that pioneered drive-through car service in 1931.” Unheard of at the time, customers drove right up to the building to make their order, while the cook served the meals to occupants waiting in their car. Fast forward seventy years: Today, virtually every American fast-food chain restaurant relies on the “drive-thru window” format to service busy commuters arriving in their motor vehicles.

Royce Hailey, patriarch of the Pig Stands clan and father to Richard, was one of the pioneers. Inspired by the same spirit of pluck and entrepreneurship that made the Pig Stands an American success story, he started his career as a Dallas carhop at age thirteen. In 1930, he leaped up onto his first automobile running board and never looked back. When he hopped off twenty-five years later, he found himself president of the company. By the dawn of the 1960s, he led the company to sell off all of the out-of-state stands and concentrate solely on the Texas locations. In 1975, he became the sole owner of the company.

But a knack for business and people skills were only part of his legend. As popular restaurant history tells the tale, Hailey “invented” the chicken-fried steak sandwich during the 1930s. Not satisfied with one culinary creation to his credit, he also helped to create the super-sized slice of grilled white bread most natives of the Alamo city know and love as “Texas Toast” (according to food historians, the Pig Stands are also credited with creating fried onion rings during their 1920 heyday).

Son Richard purchased all interest in the Pig Stands company in 1983 and forged ahead with the tradition of serving American comfort food to a public still in love with their automobile and the freedom it affords. “Today, diners can still get an oversized piece of Texas Toast, giant onion rings, a milkshake, and a tasty Pig Sandwich,” he says. “The best part is that we still sell the same Pig Sandwich made the same way that it was made so many years ago.

Along the American roadsides, it seems that the more things change ... the more they stay the same. For fans of the “World’s First Drive-in Restaurant,” there’s still nothing that compares with dining on a Pig Sandwich and a bottle of Dr Pepper while seated comfortably in America’s favorite dining room: the front seat of a car.