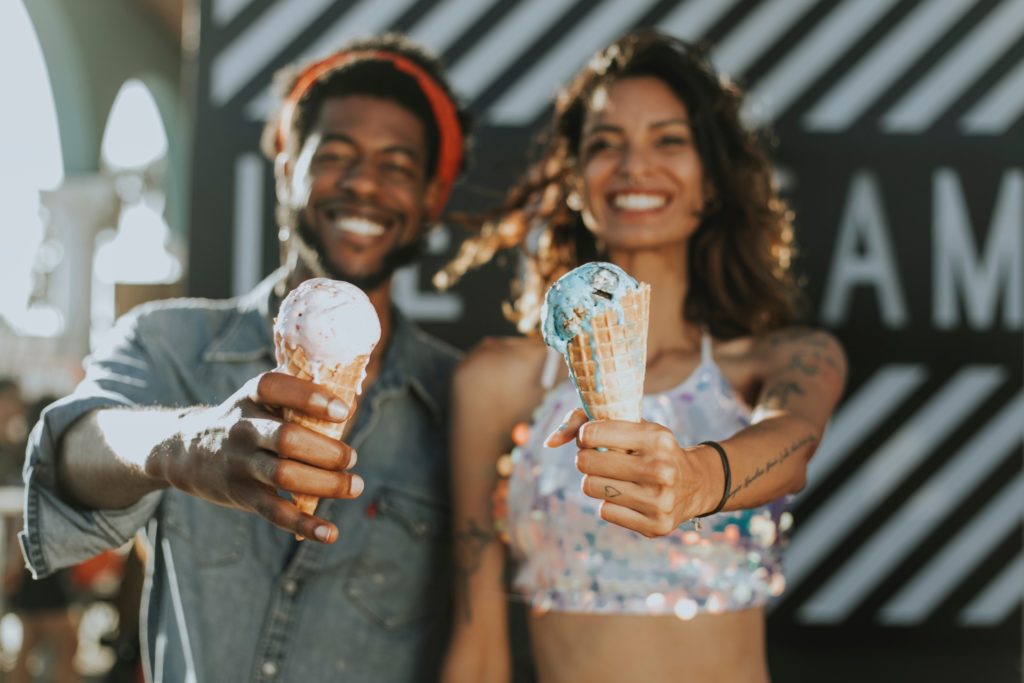 Modern Version of the “World’s Fair Cornucopia” • Photo by rawpixel.com from Pexels

Who serves the best ice cream on Route 66? Is it Foster’s Freeze in Barstow? Perhaps Delgadillo’s Snow Cap in Seligman? Or maybe, the Dairy Queen in Ludlow? The answer is highly subjective, if not completely elusive ...

The only point that ice cream historians agree upon is where the portable, edible container known as the “ice cream cone” originated: the future Route 66 town of St. Louis, Missouri. The place was the 1904 World’s Fair, and although Italo Marchiony applied for a patent on a split-cone mold prior to this event, he didn’t achieve the distinction of introducing the hand-held holder to the public. That achievement was shared among a trio of vendors who worked the expo.

That year, over fifty ice cream booths and waffle shops operated within the sprawling fairgrounds. Among the roster of concessionaires, three men staked their claim as the original instigator of the consumable ice cream cone. Could all three have stumbled upon the concept simultaneously? Probably not, as subsequent obituaries and accounts in print claim otherwise.

The first cites Abe Doumar, now recognized by the Smithsonian Institution as the most likely originator, who worked at the City of Jerusalem Show during the day. After closing, he gathered with friends at a nearby waffle shop to chat. As crowds thinned, he got the idea to roll up a French waffle into an inverted spire.

After filling it with a scoop of ice cream from a stand selling it next door, he suggested that the waffle vendor sell the combo to increase sales. It was a hit! To show his appreciation for the crowds that followed, the ecstatic waffler gifted Abe with one of his prized irons at season’s end.

A second account relates how Ernest Hamwi sold Persian pastries from his concession stand. Baked on a flat waffle iron, he topped the latticed “zalabia” with sugar and sweet toppings. When a nearby ice cream seller exhausted his supply of clean dishes, the inventive Hamwi rushed to his aid. Seconds later, a rolled up wafer provided a receptacle for a dollop of frozen cream.

The last third in the infamous trilogy of cone creators was fair vendor David Avayou. As an observant visitor from Turkey, he claimed to have imported the ice cream cone idea from France, where he witnessed small frozen confections served in pointed paper receptacles. He applied the concept to his own wares and created an edible version to hold his frosty desserts.

In spite of these conflicting origins, the popularity of the cone quickly gained momentum. Before the close of the Fair, several local foundries scrambled to produce baking molds for what was known as the “World’s Fair Cornucopia.” Eventually, everyone who had a hand in the development of the cone went on to profit from its meteoric rise to fame.

By the thirties, competition among cone manufacturers intensified—each attempting to outsmart the other with innovation. Marvels of edible engineering, “Dripless” models of the cone featured elaborate trough systems to trap melt. Others sported clever side-pockets for extra scoops. Exaggerated versions assumed the shape of bath tubs, spirals, and even space ships.

As the cone became less of a novelty, the aggressive competition among manufacturers began to wane. Major bakeries began to dominate the field and replaced unusual designs with more functional cones. Soon, simple cake and sugar cones triumphed. By then, the waffle-making artistry of Doumar, Hamwi, and Avayou was long forgotten ...

The World’s Fair Cornucopia was no longer a culinary work of art, but an ancillary food accessory. At ice cream vendors up and down roadways like Route 66, the Lincoln Highway, and U.S. 1, it served one simple function: to hold a scoop of ice cream.